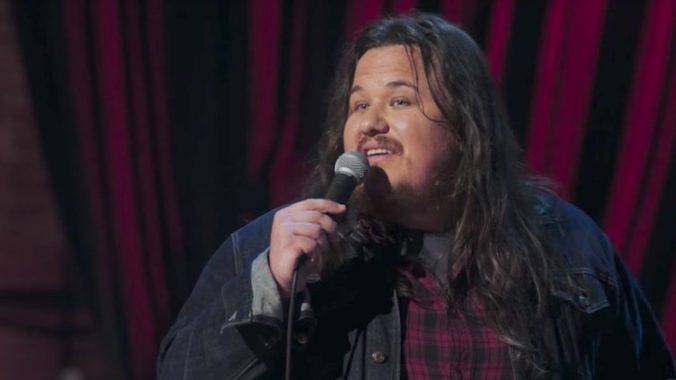 Shane Torres is a stand-up comedian and writer. We met up with him at the New York Comedy Club in the East Village.

You might have seen Comedy Central Presents, This week on Comedy Cellar or on Conan O’Brien. He has also performed at Montreal “Just For Laughs” New Faces back in 2012.

He’s one of the top upcoming comedians here in the city. Shane is a regular performer at The Comedy Cellar in Greenwich Village, New York Comedy Clubs, and Stand UP NY.

1. What other jobs did you do before starting stand up comedy? I was mostly bartending and waiting tables and I was fucking terrible at it.

2. How did you know you wanted to be a comedian? I always very much enjoyed it ever since I saw standup and when the opportunity to try it came I was all about it. It took me a while to work up the actual nerve to do it.

3. If you weren’t doing comedy, what would you be doing? Probably some regular ass shit that I would hate.

5. Who are some of your favorite up-and-comers in the comedy world? I really love a guy named Sam Evans here in New York, Tom Thakkar just taped his half hour and I’m sure it will be great. Also, Julia Claire and Hannah Boone really fucking kill me. My buddy Zak Toscani out in LA is always a fun person for me to watch.

6. What’s the best advice you’ve ever gotten? Work hard and then work harder.

7. When did you feel like you were a pro comedian? I still don’t know the answer to that, I do know I am one, but I honestly have trouble pinpointing that moment. I feel like it always will be a changing place because it’s not about being a pro comedian its about being the best pro I can be. So that feeling will change again and again.

8. How often do you perform comedy per week? 10 sets around there. Would like to do more

9. What are your favorite comedy clubs that you perform? The Cellar, of course, is up there, but New York Comedy Club is great and so Stand UpNY in the city. On the road Helium in any city is pretty damn fun. Also, Comedy on State is incredible as well as ACME. One of the unsung places is The Earl in Atlanta. Great rooms all of them.

10. What advice would you give your younger self? I would say ask yourself why not and try harder are two of the most important things. Also, love people as much as you can.

11. How would you describe your brand of comedy? Trying to be better most of the time.

12. How did you develop your style of stand up? Who were your influences growing up; both from the world of comedy and elsewhere? I think besides getting up a lot and pushing myself to write I would say trying to write jokes nobody else could tel..

13. I love to interview comedians, Can I ask what happens when you are in front of a crowd, and no one laughs? Yeah, I fucking bomb and then ask what I did to upset them. Hopefully, stumble upon something I can make hay with.

14. What made you decide to be a comedian? Were you born funny? I was so happy to do it when I did it the first time and I got closer and closer to dropping out of college for it and I finally did.

15. When can people see it? Performing in New York most nights and if you follow my social media I put it up there and also all over the country.

16. Is there anything else that you wish to promote? I have a web series coming-out with Comedy Central called Shane Torres Conquers Your Fear and my website shaneisacomedian.com