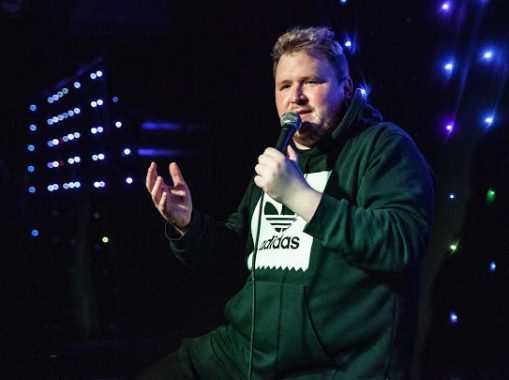 Delivering food or packages cause you can listen to a podcast and nobody bugs you and you can get high. Every person who delivers anything of yours is always high.

I’m still an up and comer so I’d say me but I also hate myself so.. Luke Mones

At least once a night

What are your favorite NYC comedy clubs?

The New York Comedy Club is great. There’s a barbershop show ran by this guy Ronnie Lorde and that show is always packed and amazing. It’s not a comedy club but whatever. It’s a barbershop. Where you perform next to bottles of that blue shit

I let them say their thing and usually, it sucks so then they bomb and everyone laughs at them bombing cause their idiots and then they don’t wanna bomb again so they shut up

Writing and performing is the only thing you can control so be good at that and hopefully, the rest will follow. Also, go to therapy.

What do you talk about in your act

I developed it through trial and error. Whatever gets a laugh that makes me feel like a good stand up and not want to take my own life at the end of the show. Garry Shandling is a big influence on me. I think Burr is great obviously. Bobby Kelly. All those guys.

I was getting high at a house party and watched a Patton Oswalt special upstairs while people were getting laid and doing special K. That’s when I decided to be a big stand up comedy star!