All You Need to Know About Miami Improv Comedy Club 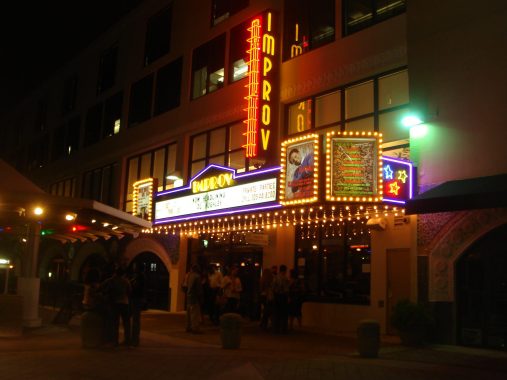 The world-famous Miami Improv Comedy Club is one of those clubs that has been the launchpad for most of the biggest names and greats in comedy.

Miami Improv Comedy Club was formerly located in Coconut Grove but is presently delivering the laughs out west in Doral. It is the newest comedy club in the location that carries the torch from its previous location.

There’s no shortage of incredible performances presented here as you drink and dine inside the City Place Doral Plaza.

This casual-upscale comedy club presents both local talents and national touring acts. It has an amazing liquor selection, which includes imported and domestic beers. Every show has a two-drink minimum that is seriously implemented.

What can Improv fans and newcomers alike expect? The best food and an incredible comedy experience in an amazing club with the same charm loyalists have always loved!’

The dress code is casual, most importantly for comfort and dress to make your mother proud.

At the Miami Improv Comedy Club, popular comedians with movie deals, HBO specials, and TV shows are regularly in attendance.

Almost everyone knows that the Improv Comedy Club chains have become popular across being some of the best places comedians with TV credits can be seen. Miami now brings to you a brand new venue for getting some laughs on watching comedians and celebrities live on stage!

The Miami Improv Comedy Club has a VIP section, a  large stage, as well as a seating area. There is beer, dining, and specialty cocktails available during the show.

The Miami Improv offers numerous showtimes based on the scheduling of the performer and venue.

Regardless, the variety of comedians you will see here are sold out quickly! So If you have an interest in attending any of the shows, it’s advised you look to see who is coming to Miami and secure your seats by booking your ticket upfront.

The Improv comedy club schedules comedians and places them on their events calendar.

Their pro shows present touring and professional stand up comedians coming to Miami on a show with huge production credits. The Showcase is always filled with experienced stand-up comedians selected to perform.

With the Open Mic, up and coming stand up comedians get the opportunity to hit the stage regularly and thrill the audience.

Improvisation comes with different kinds of shows where improv troupes come up with comedy sketches on the stage with audience participation.

How To Get There

Getting to the venue is easy. You might start seeing it once you enter the Doral City Plaza. All you’ll have to do is head up 87th ave and turn Eastbound on 36th st.

Coming from the expressway, turn off 826 on 36th street. Then head Westbound until you see the entrance to the plaza.

Also, there is a lot of sufficient parking inside the plaza’s garage for a small parking fee. Most importantly, show up to the venue early since they always get their show started early.

Finally, always watch out for events on the calendar for upcoming showtimes and tickets.