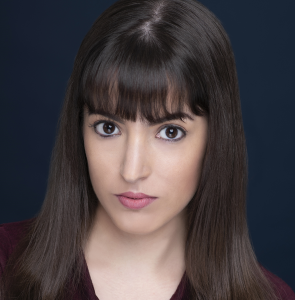 Cynthia Gray was born in Montpellier, France yet, thanks to a last-minute move, ended up being raised in a village in Ohio. She is the daughter of actress Jennifer Enskat. Growing up, Gray liked to write stories and decided at age 11 that she was going to be a writer someday.

When she was 20, Gray received her BA in English Creative Writing at Ohio University and went on to become a published writer and have many of her scripts produced.

Gray never actually intended to become an actor. While she had participated in plays in high school, it had never been something more than a fun hobby for her until her mother suggested they do a show together at a nearby regional theatre one summer during her college years.

Gray decided to go for it, as a fun mother-daughter activity and ended up realizing acting was something she had to make part of her life. When she told her mother she wanted to start acting professionally, her mother laughed, not believing her at first. Her mother soon realized she meant it and has since become a mentor to her.