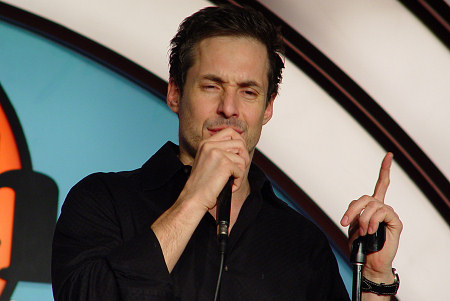 Russ Meneve is soon to be a name that all comedy fans know. Russ has quickly established himself in the comedy scene, performing at New York’s top comedy clubs, including the Comedy Cellar, Stand Up NY, Caroline’s on Broadway, Gotham Comedy Club, and Comic Strip Live. In 2006, Russ released his debut stand up album Stray Doggie Style, which was recorded at various clubs around New York City, and pulled together to make a cohesive and original album. Russ has appeared on NBC’s The Tonight Show with Jay Leno, where he killed it before a national audience on the highest-rated show in late-night television. Russ has also appeared on NBC’s Last Comic Standing, Late Night with Conan O’Brien, Last Call with Carson Daly, and The Caroline Rhea Show. He also landed a half-hour special as part of the Comedy Central Presents series. Not to mention, that New York Magazine named Russ amongst the “10 Funniest New Yorkers You’ve Never Heard Of,” so catch Russ before he becomes one of the biggest names in comedy. Buy Russ Meneve NYC Comedy Club Tickets at Best Comedy Tickets.