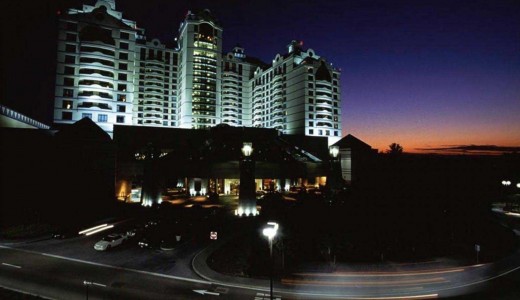 Want to get in out of the cold weather and  enjoy some live comedy in Connecticut?  Comedy clubs in Connecticut offer some of the best acts, comedians and shows in the world. Clubs like COMIX in the Foxwoods Resort Casino provides a home for top-shelf talent on the Connecticut comedy club circuit.

Who doesn’t like an exciting evening of gambling, drinks and laughter? COMIX brings all of this together by booking big names in the comedy world; including Bill Engvall (Blue Collar Comedy Tour), JB Smoove (Curb Your Enthusiasm, Top 5, Date Night and The Sitter) and Sinbad (HBO, Good Burger and Necessary Roughness). COMIX is one of the easiest Connecticut comedy clubs to get to. It’s just a quick drive from Boston, Hartford or Providence to COMIX’s home, the Foxwoods Resort Casino.

But wait! There’s more! While you’re enjoying a show in their 4,000 seat grand theater, take a special trip to what they like to call the COMIX BRU BAR. This extensive and unique bar has more than 16 beers on tap and offers a menu of food that is second to
none. If you’re driving through, working in or just find yourself bored in the southern portion of Connecticut then you’re in luck! Joker’s Wild is yet another premier Connecticut comedy club that offers some great comedians; Joe List (Late Show with David Letterman, HBO Comedy Festival), Will Noonan (FN MTV, Sirius XM, NPR). Located on Wooster Street in New Haven, Connecticut,

Joker’s Wild claims the title as the only traditional comedy club in Connecticut. They define “traditional comedy club” as a venue that isn’t attached to a country bar, casino or other type of facility. They also offer a full bar and food menu for guests looking for a hilarious, one-stop night out in New Haven, Connecticut. Another heavy-weight in the Connecticut Comedy Club scene is the Funny Bone Comedy Club. They have bragging rights as the comedic launch-pad for multiple television and movie stars. Past performances include Drew Carey, Jeff Foxworthy, Ellen DeGeneres, Chris Rock and Dane Cook. The level of star power that makes its way through the doors here is partially due to the club’s 25 year history in Hartford, Connecticut. Just a heads up though, if you’re going to depart into a night of comedic joy at the Funny Bone, you must be at least 21 years of age.