Crowd Banter is Making A Comeback in Stand Up Comedy 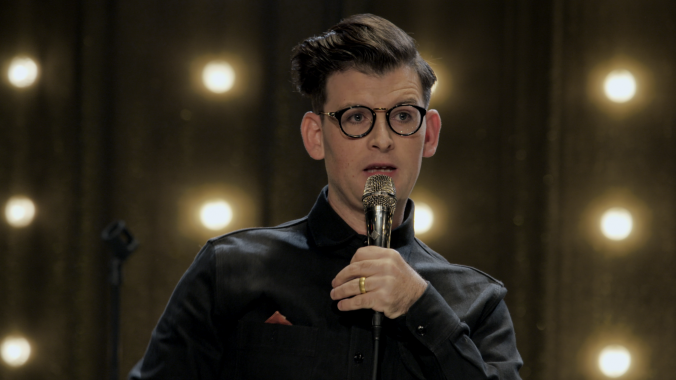 Crowd Banter Is Making A Comeback

Certain aspects of live comedy are often overlooked on specials and Moshe Kasher, Andrew Schulz, Judah Friedlander, and other stand-ups are trying to beam light on it.

Moshe Kasher was recently in San Francisco and argues that crowd work is one of the fundamental elements of stand-ups.

Hey, dude in the corner! How are you? Where you from? Nice shirt.

These could be the building blocks of an art form that is emerging in the comic space.

Many have long-derided crowd work as the cheapest way to get laughs. But it’s starting to receive more attention lately, and more comedians are beginning to make it part of the main event rather than just a supplementary part of their act.

Within the last few years, stand-ups like Andrew Schulz, Judah Friedlander, and Ian Bagg released specials that are based on crowd work. Big Jay Oakerson recorded a crowd work-based album, and last week “Crowd Surfing” by Moshe Kasher was released.

Kasher on why the subgenre is just starting to get more attention points to the broader proliferation of stand-up specials that are replacing the spontaneity of banter in live performances. He thinks the living-in-the-moment part of stand-up, though integral, has not been talked about more, and these specials are not much a departure from traditional acts than they are of a return to the fundamentals.

Kasher believes crowd work is a foundational and essential part of stand-up. A good example of jokes with banter was vaudeville in theaters vamping between acts.

Any person who sees live comedy regularly knows that showing hours on HBO and Netflix hardly captures the atmosphere you’ll get in a small room as a comedian does their thing. It’s never possible to recreate that ambiance on a screen, but you can get a close feeling with these series of specials as they borrow a feel of suspense and a tinge of danger to achieve their aims.

What is most interesting about these specials is that while their elements are closely related like a taste of insults, lewd jokes, and a white male point of view, they are, however, flexible enough to accommodate varying styles just like all other worthwhile artistic genres.

Friedlander plays an extremely arrogant expert on all things in “America Is the Greatest Country in the United States,” his extremely funny special where he misdirects with crowd work to make his finely crafted jokes seem not to have been prepared when they actually were.

When he finds an audience member who lives in Tribeca, he calls the neighborhood a model of diversity in a joke that is clearly part of his collections. “There’s  no other place where you’ll hedge fund C.E.O.s living next door to venture capitalists from a CVS inside a Walgreens?” he asks, adding: “Which are both inside a Citibank?”

Friedlander believes crowd work is a tool which he graciously assimilates into a set that is just as polished and writerly as a carefully developed routine.

With Bagg, the approach is different. His jokes are not as intricate, and he hasn’t vividly drawn his wiseguy character, but his quips feel just organic. His freewheeling act is raggedly spontaneous.

He’s incredibly alert to the fun of things going off the rails, and this is probably why his special is titled “Conversations” – The work of a true dialogue-committed comic. Even if he uses prepared materials, it’s difficult to tell. If it is too polished, it gets in the way of what he wants to achieve: an act that feels wholly committed to the comedy when two strangers meet.

Oakerson is the only comic who really engages to his audience with more focus, and you can see him in clubs, usually past midnight chatting with patrons about their filthiest thoughts.

He doesn’t mess around with the few subjects he really cares about (money, sex, and penis size) like a willy and shameless investigative journalist who’d do anything for a scoop. He would ask the usual questions about work and where you come from, but he is not all that insensitive, so occasionally, he tosses the “Are you successful?” question, which is guaranteed to produce interesting results.

Schulz, a fast-rising star whose work “Crowd Work Special” was released on YouTube last year has similar interests but with a shorter attention span. Quick on his feet, he doesn’t waste time on pouncing on jokes, making meals of first impressions, and well-known stereotypes. Although such a strategy means long stretches without laughs from the audience, however, the crowd doesn’t have to say too much.

Kasher takes full advantage of his audience with his album, and this is due in part to the meaty questions he asks. He starts with the usual ones, like “What’s your wildest sexual experience?” which is sure to produce juicy stories. And he just gets them. He knows the quality of the story. If it’s not extraordinary, he’ll interrupt more, and if it isn’t great, expect him to follow up with the bum: “Now let me explain to you what a story is.”

He’s gentle with his teases, and laces with self-mockery. He freewheels and then is more structured, he lets the audience in to hear their story, then riffing before dropping the “perfect punch line. And still, he concedes he has a couple of stock comments. If he asks about someone’s job and they reply “the military,” he thanks for them defending him but follows with a punch line: “You’d be disappointed to know what I am doing with it.”

He starts his album by saying too many people have maligned crowd work, but there are masters of the craft like Don Rickles, Patrice O’Neal, and Paula Poundstone. Todd Barry, along with Oakerson, anticipated this trend when he released his 2014 special “The Crowd Work Tour.” The documentary is comprised mostly of off the cuff shows, elevating his sarcasm so much that he can tease and doesn’t have to be hard.

Barry’s mockery always seems to be about to go for the kill, but usually never turns out so. That restraint has helped him develop a distinct, distinguishable style. While performers chuckle at their lines, Barry is not looking for the easy ones and maintains an emotionally dead persona.

When a patron comments using a sexual innuendo on his special, the audience waits in anticipation of the obvious comeback. Barry looks right at him and blurts, “I don’t want to talk to you anymore,” and the crowd roars.