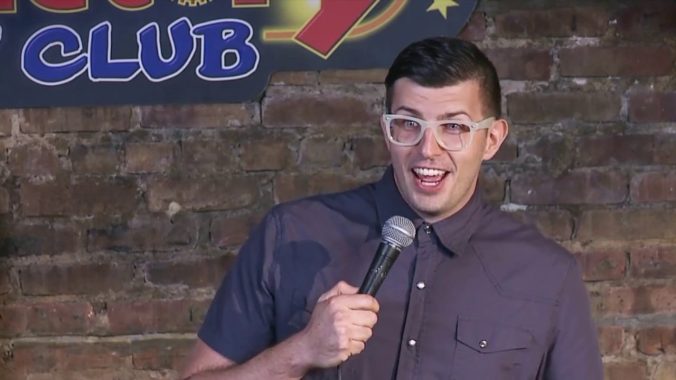 There’s no shortage of comedy clubs in NYC… with so many to choose from this night, we decided to stop by Greenwich Village Comedy Club just one block south of the Comedy Cellar.

This is perhaps the busiest street in the world to see stand up comedy with two Comedy Cellar, Comedy Cellar Village Underground, Grisly Pear, and Greenwich Village Comedy Club and the Village Lantern right around the corner there are just so many to choose from.

We saw the lineup at Greenwich Village Comedy Club and it was a stellar lineup and need some laughs after a busy work week. We decided to chat with a few comics after the show and one of our favorites of the night was Luke Thayer. We interview him right after his set at a jam-packed sold out show and here is what he had to say.

1. What other jobs did you do before starting stand up comedy?
My first job ever was working at a video game store, kind of like GameStop. After that, I’ve worked loading docks, sorted US mail, a Bob Evans for 3 days, substitute teacher, and as a bank teller. The last day job I ever had was as a temp at an investment bank…and by “temp” I did that job for 5 years straight. I was never an employee, and I don’t even think it’s legal to do that, but New Yorkers do what they have to do to survive.

2. How did you know you wanted to be a comedian?
That’s a two-part question, even if you don’t know that it is. Because I always knew I liked making people laugh, or at least get a reaction from them. Knowing I wanted to be a PROFESSIONAL comedian…I didn’t even know that was an option for a kid from Indiana. It wasn’t until I saw a friend’s sister perform at a local open mic, and afterward, they told the crowd “You can do this too,” that I knew “I HAVE TO DO THIS!” “I CAN BE A COMEDIAN!”

3. If you weren’t doing comedy, what would you be doing?
Probably something in athletics. Maybe owning a gym…who am I kidding, WORKING at a gym. Maybe being a really low-level basketball coach.

4. Where are some of your favorite places to perform?
My favorite place is ANY place that has an audience excited for comedy. It could be to see me personally or just see a comedy show. I don’t care if it’s at one of the top clubs or a coffee shop. I just love performing for people who love the experience of live comedy.

5. Who are some of your favorite up-and-comers in the comedy world?
I mean who do we count as up-and-coming? That could be anyone less famous than Kevin Hart. Or it could mean someone who just started doing open mics a year ago. I can say this with all sincerity, I love comedy and there are so many fun acts to watch out there. I see comedians that make me stay in the room and watch just by whatever aura they have about them. If you want to see a comedian as they are on their way to being good and then great, then go to a local club and buy a ticket to see someone you’ve never heard of. If you go in with a mind to have a great time, I bet you 9 times out of 10 you will.

6. What’s the best advice you’ve ever gotten?
Don’t worry about the crowd thinks. Stop carrying about the opinion of the audience. Which by the way, is nearly impossible to understand for years into doing comedy. I had to get to an experience level that allowed my brain to go, “Ohhhh, that’s what they meant.”

7. When did you feel like you were a pro comedian?
Maybe a year or two after I left my last day job. I knew intellectually I was making my money solely with comedy, but I didn’t FEEL it until a year or two into that lifestyle.

8. How often do you perform comedy per week?
It varies on the week. Usually somewhere between 5-10 times a week. I have to do some trade-off in nights now because my wife, Abbi Crutchfield, is also a comedian and we alternate our schedules as best we can because we have a 1-year-old.

9. What are your favorite comedy clubs that you perform?
Similar t my answer for #4… any club that treats the performers well and gets an excited audience. The Funny Bone chain does a really good job of providing that experience in all their clubs. And I’m always looking to find more clubs that really love comedy.

10. How do you deal with hecklers?
I’m not one of those comics that goes to anger. I’m pretty good at this point at reading people and figuring out what type of “heckling” this is. Most times it’s someone that’s too enthusiastic. With that type of person, I try to use a little wit, and if that fails, I just tell them straightforward to stop talking. Very very rarely do I get the person that is speaking with malice. Those people, I dig in a little deeper.

11. What advice would you give your younger self?
Keep pushing. Hang out more. Knock on doors. Make yourself known more. I’m a Midwestern guy at heart, and feel this sense of politeness and waiting my turn. Don’t worry about that at all! Take the risks.

12. How would you describe your brand of comedy?
“What’s off about this situation.”

13. What do you talk about in your act?
Moving through the world. So that means I’m talking about relationships, living situations, where I grew up, how I grew up, what people are like that I come in contact with every day. Life experiences basically.

14. How did you develop your style of stand up? Who were your influences growing up; both from the world of comedy and elsewhere?
I developed by doing tons and tons of sets. Getting up, trying, failing, succeeding, and doing it again. I’m a student of comedy. I’ve collected and listened to albums since I was a teenager. I let the knowledge of things influence me and the way my mind works. Studying comedy yes, but also other things like science, religion, pop culture. Anything I can get my mind on. There’s also just life experience that influenced me. Growing up in the midwest, having a preacher father, being a fat kid, having an interracial marriage, on and on. I don’t even know if we can quantify all the influences we each have on our current and future selves. (I hope this answer makes people think I’m smarter than I actually am!)

15. I love to interview comedians, Can I ask what happens when you are in front of a crowd, and no one laughs?
It almost never happens anymore that a crowd doesn’t laugh…at least for an entire set. It used to! But I’ve learned to be patient if a joke doesn’t land, to be ok with some silence, and how to win them over. Not all silence is equal. Some times they’re really intrigued and intensely listening and seeing what happens next. Also, if a crowd isn’t feeling me as a performer (which can some times happen), I’ve learned how to win them over, at least to some degree. Change gears. Talk to them more. Call the moment. Whatever it takes. If that doesn’t work, well then I guess we can all laugh in the back about how bad that went.

16. What made you decide to be a comedian? Were you born funny?
This is related to question 2. I remember being 4 years old when I moved to Indiana from southwest Missouri. I would tell people, “Carthage Missouri, born and raised,” which would always get a response from adults. I don’t know that I realized it was funny to them or what “funny” was even, but I saw it surprised them to hear a little child say that. So, I repeated it. Growing up, I was shy and overweight, so the school had its issues. In 6th grade, our teacher was teaching us about the horrors of drunk driving and asked us if we wanted our parents to have to identify body parts. I turned around in my desk, holding my right wrist and loudly said, “Is this your hand?!” The whole class erupted in laughter. Everyone, including people who didn’t seem to like me, or thought I was a nerd and beneath them. They all couldn’t help but laugh. I did get in trouble, but that laugh was addictive. From that time on, I HAD to make people laugh. I learned to keep it quieter in class, cracking lines throughout the school day to the nearest student who would listen. Occasionally they like the line and would say it louder and I would hear other kids laughing at that joke he just said and thought, “That kid didn’t come up with that, that’s MY joke!”

17. When can people see it?
I’m assuming “it” is my comedy. 🙂 I perform constantly, often in New York, and often out around the country. If you want me to come to your town, request me at your local comedy club. If “it’ isn’t referring to my comedy, then just remember I went to public school so it’s very likely I missed the subtle cues I was supposed to catch.

18. Is there anything else that you wish to promote?
My debut album “Hopes + Dreams” is available and can be heard basically anywhere you download albums. I post jokes every day on Twitter @comedianluke and you can find my performance schedule at comedianluke.com. People can reach out to me on any social networking platform or through my website.

Thanks for reading this interview with the talented comedian Luke Thayer at the Greenwich Village Comedy Club. If you are looking for some great laughs there is no better place to find tickets.