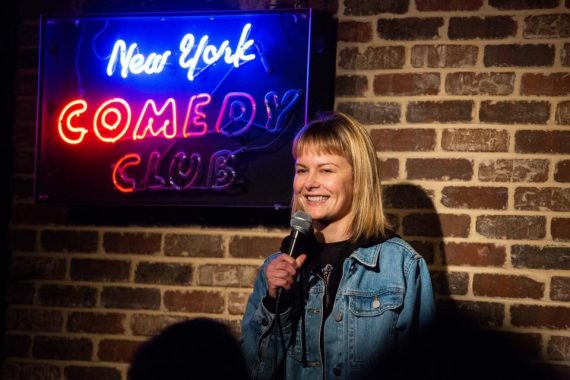 2. How did you know you wanted to be a comedian?
I didn’t even know, I just became one. When I started I was just having a really bad year and had no pride left.

3. If you weren’t doing comedy, what would you be doing?
When I started doing mics I was considering becoming a dog trainer or a social worker… I was told I would be terrible at both of those things, and a friend suggested I start doing comedy.

4. Where are some of your favorite places to perform?
I love performing at clubs, and Knitting Factory in Brooklyn, Dynasty Typewriter in Los Angeles, and bar shows around the city are always a fun toss-up.

5. Who are some of your favorite up-and-comers in the comedy world?
Anybody who learned it on YouTube or Instagram.

7. When did you feel like you were a pro comedian?
When I got my first check for $40.00 from LOL Times Square Comedy Club. (I was wrong.)

8. How often do you perform comedy per week?
I average about two shows a night, so 14-16 times a week. But the challenge in NYC is actually working smart, and not just hard.

9. What are your favorite comedy clubs that you perform?
Love New York Comedy Club, and the pop up shows that The Stand is doing around the city at Rockwood Music Hall, and ACE Hotel. Looking forward to seeing their new club when it opens.

10. How do you deal with hecklers?
Kill their family

11. What advice would you give your younger self?
“Being fat now is gonna make you funny later.” (wouldn’t have helped, though.)

12. How would you describe your brand of comedy?
I can’t answer this question without sounding pretentious so I will decline.

13. What do you talk about in your act?
Lately, I’m talking about how both my cat and then my dog- died this year -and I had a 5-year long relationship end. I also started sleeping with a DJ, which is somehow worse than all three of those things.

14. How did you develop your style of stand up? Who were your influences growing up; both from the world of comedy and elsewhere?
I read every book I could about joke writing, and I would watch specials and transcribe jokes to label the setups and punchlines so I could figure out what the anatomy of a joke looked like. I still do that when I feel lost, but now I’m trying to learn how to just talk without hiding behind the security of a joke. I think the best standup combine their writing with an ability to just be their natural, spontaneous selves. Jokes are hard to write but once you know how to do that there’s very little risk involved.

15. I love to interview comedians, Can I ask what happens when you are in front of a crowd, and no one laughs?
Nothing. I usually end up threatening to assault someone.

16. What made you decide to be a comedian? Were you born funny?
I just started making money doing it and I was like “oh, I guess this is real now.” I was born kind of funny, but I don’t think you have to be born funny to get good at standup.

18. Is there anything else that you wish to promote?
Check out me and Corinne Fisher’s podcast, “Two Less Lonely Girls,” on iTunes and Spotify