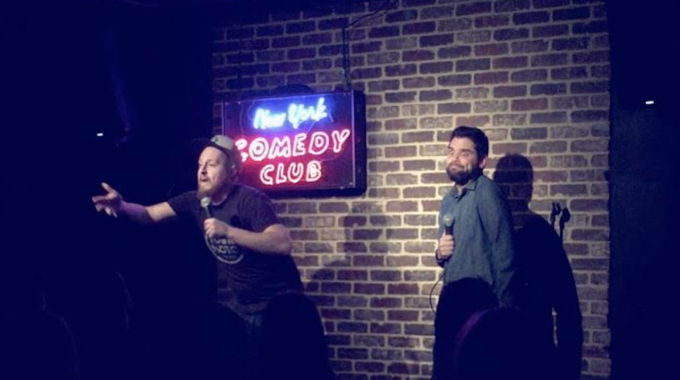 We met up with Jay & Eytan comedians right before their sold-out comedy show at the New York Comedy Club. We got to learn a little bit about them and their comedy.

1. What other jobs did you two do before starting stand up comedy?

We’ve done what feels like every job under the sun. Anywhere from serving, to call centers, to working on film and photosets. All of which drudge up horrible memories so we’ll move on to the next question.

2. How did you know you wanted to be a duo comedian?

We’ve been performing together in one way or another since 2006. We were part of a large sketch troupe in Toronto called “The Boom” and had a sold-out monthly show for 6 years running. Within that large troupe, we always wrote lots of scenes just the two of us, and have always had a chemistry on stage together. When we moved to New York in 2013 we slowly started building a new act that feels more like a two-man stand-up act, with an emphasis on acting out jokes as opposed to just telling them. It all happened pretty naturally.

3. If you guys weren’t doing comedy, what would you two be doing?

4. Where are some of your favorite places to perform in New York City?

Since moving to New York we’ve found a home at New York Comedy Club. The intimate space, staff, and comics that regulate that club are some of our favorite people in the city. We’ve had some shows at Caroline’s and The Stand as well that have been really fun.

5. Who are some of your favorite up-and-comers in the Stand-Up comedy world?

Stay in your lane and focus on the things you can control as opposed to external forces that you have nothing to do with.

7. When did both feel like you were a professional comedian?

The first time we didn’t work for an entire month and solely made a livable wage off of comedy. Boring answer but it’s the exact truth.

8. How often do you guys perform comedy per week?

It all depends on availability. Lately, we’ve been honing the act and getting out there as often as possible, but sometimes a couple of weeks go by without us hitting a stage. However, we have a pretty diligent writing routine and meet multiple times a week for about 4 hours to continue to work on the act.

9. What and how did you two come up with being a duo comedians?

We didn’t come up with it as much as it just naturally occurred. Over time we knew we loved being on stage together and had solid chemistry up there, and then it became a question of finding the right material that requires nothing more than a couple of mics.

A heckler just wants to be involved in the show. So usually we just include them on one joke, and then anything beyond that we politely remind them that they had their turn, and now it’s our turn again. We’re a couple of polite Canadian boys, so the honey over vinegar approach is usually the one we adopt. And if they really suck then usually security handles them for us.

Our comedy ranges from quick, offbeat impressions, to honest and relatable stand-up, all the way to some fully choreographed musical numbers. Silly and fun is the general vibe, but that won’t stop us from going on an angry rant about Google Maps once in a while.

That’s hard to say since the topics we touch on are a bit all over the place. Lately, we’ve been talking about how we’re in our 30’s now and our bodies are failing us compared to our 20’s. But we’ve also got an impression of a guy who forgot he recently ate beets peeing. And then we do a piece called Goodfellas The Musical. So, yeah, all over the place.

Developing a style comes from being on stage in front of people and finding your own voice and point of view. We’ve always loved the masterful joke writers like Carlin and Seinfeld. But someone who can take an idea and extract all the funny out of it, like a Bill Burr or a Dave Chappelle is also a huge influence.

Take the most embarrassing thing you’ve ever felt and multiply it by suicidal thoughts.

Jay’s guidance counselor told him to do comedy. Eytan needed to make his dad happy by going to college so he applied for the Humber College Comedy Program. That’s where we met. Jay was born funny, Eytan has to work really hard to keep up.

We perform the 1st Monday of every month at 7 PM at New York Comedy Club in Gramercy as featured comics on the Comedy Records and Interrobang Showcase.

We have a podcast, 2 albums, and some funny videos at www.jayandeytan.com