Interview Stand Up Comedian Jeffrey Leach At The Comedy Cellar 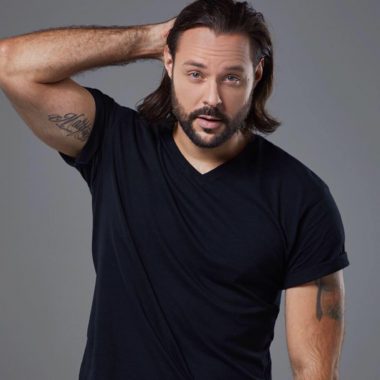 We met up with stand up comedian Jeffrey Leach at the Comedy Cellar in Greenwich Village right after his performance at a sold-out comedy show in NYC.

My parents instilled a work ethic in me from a young age and I’ve had a job to pay my way since I was 11 years old when I started a weekly paper route.

Since then I’ve produced live shows, worked in commercial radio, been the booker of major music venues, DJ’d at major festivals and produced remixes for Island Records and Ministry of Sound, I was also a television presenter and actor prior to trying my hand at stand-up comedy 8 years ago. Now I pursue all things written, performative and creative.

Using humor as a currency to curry favor with people around me was always a skill I possessed even from a young age. I knew that making people laugh earned their trust, gained respect, status and even led to affection from the opposite sex.

However, the moment I knew I wanted to be a comic came after a string of successful tv shows in the UK… I felt so empty. It meant nothing and I was yearning for live performance more than the trappings of on-screen success.

The first stand up set I did lasted 40 minutes and was mostly lunacy, but the feeling of bringing joy to so many people with my relentless stage presence and ridiculous life stories made me feel higher than any drug have ever taken me. That joy remains to this day.

The Comedy Cellar in NYC is my spiritual mecca and comedy home. They brought me to the US, they gave me my start in this country and I will forever be in debt to the owner Noam Dworman and booker Estee Adoram.

Westside Comedy Theatre in Santa Monica in California is also of my favorite spots to do shows, it’s a great space for inventive and explorative comedy art. I also like to under-perform in the bedroom too.

Jessica Kirson is about to blow up. She’s had more screen time lately than ever before and she deserves it because she is a truly brilliant performer. I also love to watch Bryan Callen on stage live, infectious energy and stagecraft.

Jenny Zigrino is also one to keep your eye on, she’s got some beautifully written lines, some amazing set pieces and she’s a kind soul to boot.

I used to hike with Ru Paul and he once quoted his own song lyric “unless they are paying your bills, pay them, bitches, no mind” and he is so very right, I spent so many years worrying what people thought of me, who really had no influence of say in how my career would progress.

The award-winning actor Laurence Fishburne is like a walking oracle of honesty and humility, he reminded me that you can choose your own path to success, not reliant on following ‘trends’ or ‘normal practices’ because people always remember the rule-breaking daredevils within an industry.

My other talented actor buddies Michelle Gomez and Jack Davenport advised me to get sober, and I will always have infinite love in my heart for them helping to save my future by doing so.

When did you feel like you were a professional comedian?

I think the term professional comic doesn’t ring true. I know so many hugely successful comics who act unprofessionally all the time. For me, the most important moment is when I realized that I was a TRUE comedian.

About a year ago I truly found my comic voice, I started to live in bits of material and explore them more fully, I am so undeniably comfortable on stage now, more so than I ever am OFF stage, and that for me was the stamp of approval on my ‘pro comic’ status. Being paid by professional comedy clubs also helps.

Los Angeles is the only city where I allow myself time to write, produce, do voice acting and commercial jobs, auditions and pitch meetings aplenty… and therefore I might only perform 3-5 times a week if I’m lucky.

What are your favorite NYC comedy clubs that you perform at?

The Comedy Cellar is the holy grail in NYC, I also have a deep love for the amazing New York Comedy Club, Stand Up New York, The Stand, Westside Comedy Club, Gotham, Creek & The Cave and all of the other wonderfully run, comedy-first, home-grown spots that nurture and encourage brilliant new acts.

New York is hands down the best place in the world for stand-up and that’s definitely due to the plethora of clubs that truly care about the craft.

How do you deal with hecklers?
Expertly.

You won’t escape depression with anything else except live performance and brutal honesty.

Thoughtful and risqué revelations that will turn your world view on its head.

Love, heartbreak, sex, political activism, dreams and roll them all up into one animated, physical re-enactment like that lunatic, story-telling drunk at the end of your favorite dive bar does.

Who were your influences growing up; both from the world of comedy and elsewhere?

My background is definitely heavily actor-based. So I’m a story-teller, an ‘act out’ comic and I love to create the characters, voices, and mannerisms to put YOU directly into the story I’m sharing with you.

That theatrical storytelling was encouraged by watching the greats, such as Robin Williams, Billy Connolly, Richard Pryor, George Carlin and Bill Hicks. Then the acerbic lines of Joan Rivers and Greg Giraldo, those clever turn of phrases that they employed added to the brutal honesty of crackpots like Sam Kinison and Patrice O’Neil gave me the flavor of a hard ass laying it out as it is, no smoke and mirrors.

Finally, I took some of the silly and playful improvs of Eddie Izzard and Steve Martin to let the theatrics of my act blossom.
I love to interview comedians, Can I ask what happens when you are in front of a crowd, and no one laughs?
Fortunately that rarely ever happens. I think a nice call back to your ‘professional comedian’ question applies in this case. Once you’re a pro comic you should be able to win over any crowd.

I’ve walked on stage and a crowd has instantaneously hated my aesthetic, my accent or my face… and I have still won them over by finding the core of what makes us the SAME rather than what makes us DIFFERENT.

Empathy is at the core of all of the greatest comedy throughout history. These days when no-one is laughing, it’s because I have purposely created a moment where they are hanging on my every word in a theatrical pre-cursor to a left-field surprise punchline.

Therapy is applied when one ridicules a thing of darkness and turns it into a thing of light through humor. I consider the job we do to be that of ‘Amusement Alchemists’.

I was a funny kid sure, but my humor was delivered then to win favor, cover some insecurities or simply to appear attractive to a girl I liked. These days I decide to make people laugh to help them heal, and myself too in the process.

When can people find you?

All of my live dates can be found at www.jeffreyleach.com and I put details of all my live shows in LA, NYC, and Vegas up on my social media accounts on Instagram and twitter @jeffleach

I have two shows I am producing right now. One is a post-apocalyptic comedy panel game show that fuses a ‘make your own adventure’ style of story-telling and improv, with a panel of comics taking on banter rounds and escape room challenges.

It’s called ‘The End Of The World Show’ and runs monthly at www.westsidecomedy.com in Los Angeles and www.bunkhousedowntown.com in Las Vegas.

It’s a comical take on a recovery meeting, led by myself as the ‘Reverend Leach’, with our very own ’12 Steps To Being Funny’ and a line up of epic performers sharing stories about drink/drugs/sex ruining their lives, and another story about what they are grateful for.