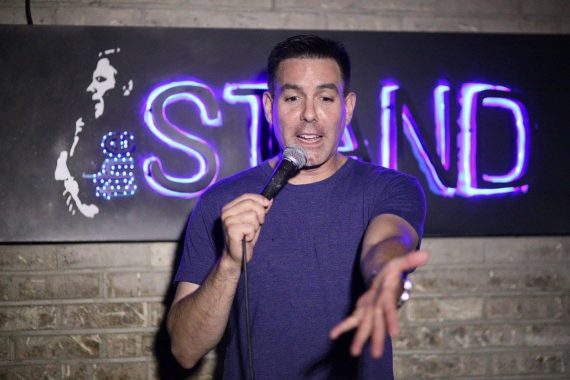 Before doing standup comedy, I use to work as a recruiter in the plastics industry. Which sales jobs are fantastic in regards to knowing where you stand. It’s much like comedy, you know you’re worth immediately if you’re making the company money, you’re good. A lot like comedy, if you’re getting laughs, you’re good.

I always knew I was into comedy, when I was in middle school, I’d watch HBO specials and assume that other kids did to, then I’d go to school and want to talk about how funny Fred Stoller, Judd Apatow, and Barry Sobel were, and other kids would be like “Who are those people?”

I don’t know, the great thing about comedy is that when you’re creating new jokes, no matter what else is going on in your life, you feel amazing. You could be working some great gigs and making money, but if you’re not growing with more material, you feel worthless. The run is creating jokes.

I love The Stand Comedy Club, every other Tuesday at 8 PM, I host Northern Discomfort there. Carolines is great, I remember watching the specials there when I was a kid, and it’s surreal that I get to perform there now, and headline there occasionally. Also, the Creek and the Cave has been amazing to me, every fourth Saturday of the month Doogie Horner and I host Shoot the Shite! there. I live in Long Island City, so it’s a place I frequent at least two or three times a week.

There’s a lot of great comics coming up, Ian Fidance is hilarious and a weirdo, everyone is going to love him, he’s great. Kendall Farrell is fantastic, he’s a young dude that I always enjoy watching. Wendi Starling is great, also keep your eyes open for Bob Biggerstaff, nevermind he’s already been on Comedy Central, him hosting the podcast The GHOLE (Greatest Hour of Listening Ever!) w/ someone named Ray DeVito, it’s going to be huge!

Just keep writing & performing, don’t get too high with the highs or too low with the lows, just have fun and keep getting up at least six times a week.

Honestly, when I was just walking around in real life, not doing any shows, and people just recognized me. I want to say it started when I’d be a reoccurring guest on the popular podcast “Keith & the Girl” and a few times people would ask if I was Ray DeVito, that was cool, once it was at a Lynyrd Skynyrd concert in at Yonkers Raceway many years ago, and that felt good because I wasn’t anywhere performing and I got recognized.

I try to get up at least six times a week, I try to at least take one day off, just to maintain sanity

Creek & the Cave, Carolines, The Stand Comedy Club, Old Man Hustle, New York Comedy Club, and Gotham. I need to get up to Stand Up NY & the Comic Strip more, two clubs that I love but don’t get to go to as often as I’d like.

It depends on the vibe of the heckler, are they trying to be a jerk? Or are they just unaware that commenting is frowned upon, each situation is different from each other.

Get on stage more!

Personal experiences, and talking through my outlook on life. It comes across phony when you don’t do that.

Influence in comedy, there’s a lot of great comics, as a kid I remember really liking Fred Stoller, John Pinette, and Bill Hicks. Currently, I’m big fan and friends with a lot of great comics, but Bill Burr & Jim Gaffigan, I find most impressive, they’ve been so good for so long, and still coming up with new hours every year.

Honestly, it depends on the scenario, if you’re trying something new and the crowd doesn’t come with you? I say just own it, accept it, I can be self-deprecating as it is, if you say something that doesn’t hit, there’s not wrong with acknowledging it.

If I was born funny, I wouldn’t have to spend so much time writing jokes, I think it’s something all comics have to work at, but yes, born with a sense of humor, I’d say that’s true.

The show for me to promote is Northern Discomfort at The Stand Comedy Club 8 PM every other Tuesday, the next one is August 27th.

I have a new album coming up towards the end of August called “Well…This Crowd Liked Me” it’ll be on iTunes, Spotify, etc. Here is a link to Ray DeVito Website