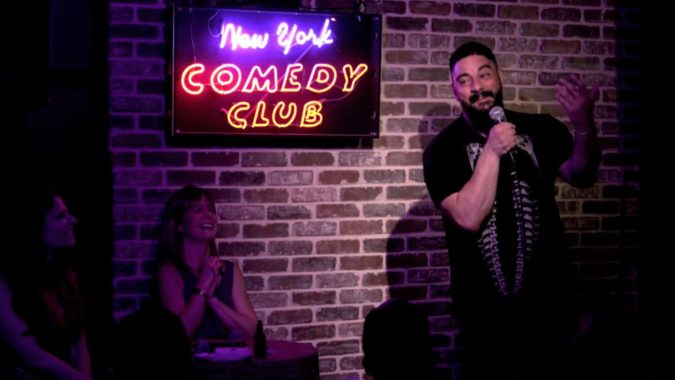 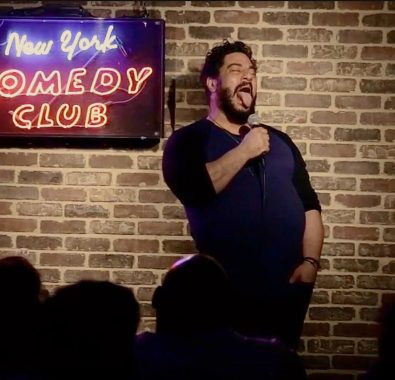 People would always laugh at me when I got angry. I went for a Masters in acting at the Yale School of Drama, and we’d be talking about something tragic, say like 9/11, and I would talk, and they‘d laugh. Then THAT used to make me angry. They certainly weren’t being malicious, and I didn’t understand what was humorous about my angst. But people would tell me that I should be a comedian. I always looked at stand up as the underbelly of show business, booze, and rooms full of loud, blousy women drunk, smoking and screaming. Just chaos. Stand up was barely a thought in my head. I mean, to a degree it was, but my reality was that I was way too scared. Then I graduated from grad school and eventually I found myself hating theater. “You’re the racist, greaseball Italian. He stands on stage for three hours and has no lines, but he’s IMPORTANT! You’ll be paid $1.47 at Theatre by the Pothole for a six week run.”

Worse than that, It was so goddamn politically correct. So much so that I felt like it was no longer even truthful. Everything was a wash, just all beige. How many times can we watch Christine Baranski wear red and be a bitch? Colorblind casting for some colors, but not all. So much bullshit was going on, and the results were more often than not just mediocre.
So I went looking for a job as a bartender in a comedy club, “just to watch.” I was hired at the first place I walked up to, resume in hand. It was at Stand Up New York. I was too afraid to ever get on stage, but I watched and watched.

I saw so many great comedians there, Patrice, Attell, Vos, Mike Destefano, Vecchione among others. The manager, Mosavia, would say “go do the check spot! Get up there!” but I was paralyzed with fear. Eventually, there were four deaths in a row within my family, and I had nothing to be afraid of anymore. Cancers, brain hemorrhage, suicide; all within a few years. After that, I just started getting up on stage, I was out of my mind. I found myself in dark bars and comedy clubs at 4:30 in the afternoon, then on to the next and the next. I had started going to open mics, religiously. They saved my life.

Winter of 2006. A Wednesday night, open mic at Comedy Cellar. I got there early, but by the time a piece of spiral notebook paper appeared outside, every other hand grabbed at it, like piranha. I remember I had no pen, and asked to borrow a fellow open mic’er’s. He rolled his eyes and handed me a stub of a pencil. I ended up being like, number 24 on the list.
Cut to inside the club, I ordered a vodka club soda (because I thought you had to order a “drink” drink) and sat, waited and listened and waited and listened. It was my first time, so I was behaving like a polite audience member would and should. I had no idea that you could behave like a cockroach giving birth on a toilet seat. Anyway, the comic before me, number 23, goes up on stage, I am finally one comic away, and I remember some of his material: “I don’t have no problem wit gay people, BUT… AIDS AIDS AIDS, faggot Faggot faggot.” I had no idea that a world like this even really existed, that’s how sheltered I was coming from fancy acting schools with directors and bottled water on the table, hours of discussion on the theme, dramaturgy, cans of highlighters and pencils and 10-minute breaks. Suddenly it was a world with no rules. I got up on stage and said “Clap it up for Kevin, he’s opening for Deborah Cox at The Roxy next week!” and it got a big laugh! That’s the first thing I said on stage in front of other people, ever. I had commented on the truth, and how angry it made me. The rest of my set was garbage, like Neil Diamond singing rap and Alice from The Brady Bunch having lesbian tendencies. Brilliant. Ugh.
I pursued stand up for about six months, and then it was time for my first bringer show. I made up a big invitation page on My Space. That night, I was number 462 or something like that in the lineup, someone in the audience threw up during my set in front of me, and I quit comedy until 2009. October of 2009, that’s when I really began the whole thing.

Why did you pick New York City instead of LA or anywhere else?

I am from here, originally, so it was the organic thing to do.

How long did it take you to get paid work in comedy?

I think about six months. I was asked to do a show where the comedians producing it “passed the hat.” I made $93.00. I felt like I was rich. I have to say this though, so much of the work that I got that paid for was either work that I pursued myself, by sending out my tape to marginalized markets (aka GAY), submitting to festivals earlier than the norm (which brought me to work) or fellow comedians giving me a leg up. It has always blown me away, the way comedians have always helped me out. Most of the work (over 90%) I’ve gotten have been either directly from fellow comics or referrals by them. Actors (and directors too, with whom artists have a relationship with) could learn a very good lesson from the comedy community.

Ugh. Quit.
There is a formula to it. No way around it. You absolutely have to go through the obsessive, open mic phase. It is like going to the gym for a comedian. You are not a comedian unless you start this way and do this for a few years. Then you meet your little group, and the bar shows start, or you start your own, and bark for it, maybe festivals, road work, colleges, eventually check spots at clubs… Some people will get breaks early, with regard to obtaining management, which is a fabulous shortcut. I was never in that group. Neither have many of the comics I admire most. But I have always continued to work my ass off, and as a result, I’ve become fearless. Don’t get me wrong, I would love to be signed to ICM, so much so that I would shoot my mother for it, but the result of all that hard work I’ve done – I’ll always have that and it feels amazing. Also, my mom has been dead for 10 years already.

What is the most important lesson you learned in Comedy?

Never compare your path to someone else’s. Zzzzzz.
Kill yourself if you use words like “path.”
Only listen to people who possess what you want. Even then, try and sense if they’re coming from a good place. The owner of The Comic Strip said about me, two months after I started in 2009, in front of a room full of people, after I’d performed: “Nothing special.” That’s all he said. Actually, he croaked it, because I think he has throat cancer. I wanted his approval so badly, I was really hurt at the time. Now I realize how none of that matters. “They hate me!” The “they” always changes. Let go as much as you can. You’ll need to, in order to continue in this business, which is almost never fair.

How do you come up with the material?

Catching what’s going on inside my head. Memories. Writing it down immediately if I catch myself doing something that’s not right, like writing an earnest review on-line for Dominio’s Pizza. I have to ask myself, why am I so hurt? What has led me to this ridiculous behavior? And hopefully, I can find what has caused the wound.

Why is there so much sadness, depression, addiction in the comedy world?

We‘re all still trying to get fed. Something was missing, during a formative chapter. Without that past life, who gives a shit. A painter with nothing to paint. I don’t want to hear jokes about your girlfriend and the remote control getting lost. I don’t give a fuck about casual. Who are you, and what made you into the monster we watch today? That’s what I want to see. Someone who belongs in a hospital. Man, those inner tortures help other people let it out and rip up a room with laughs. I love how important good comedians are. Yeah, dick jokes, blah blah blah. But to connect and have someone think “holy shit, I totally feel like that too!!!” That’s everything. But the flip side, the demons, don’t they ever fucking shut up? Mine do. But they must nap, because they always wake up again and I find myself eating Taco Bell at 2:00 AM outside of my high school in suburbia.
We’re crazy.

Pick one thing??
Trump supporters and the lack of logic. The hatred.
Homophobia in minority communities who should know better. That breaks my heart.

Which comedy clubs do you typically perform at?

So grateful to be able to do so:
New York Comedy Club(s!), Carolines, Stand Up New York, Gotham.

Who are some of your favorite up and comers in the comedy world?