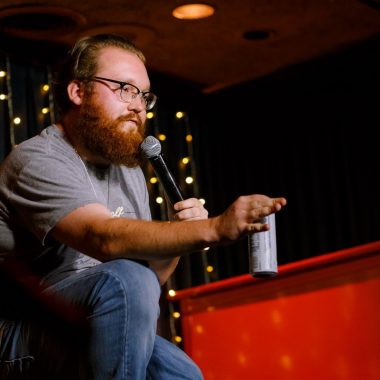 Dan LaMorte is a New York City-based stand-up comedian. Dan was one of the youngest comics on the scene and at only 22 years old has built an impressive resume. He has been seen doing panel on FOX’s Red Eye, showcased on 2016’s Comedy Central’s Comics to Watch, had his stand up featured on NBC Universal’s COZI TV, was featured on the 2017 season of AXS TV’s Gotham Comedy Live, and in January of 2017 he released his first album “Not Enough Pieces” through On Tour Records.

The album got plenty of love on the iTunes comedy charts, it was met with great reviews and a lengthy stay as the number one best selling stand up album. The album is also a popular play on SiriusXM’s Raw Dog Channel, where Dan is also a guest on their many shows such as the Raw Report and the Check Spot. Dan is a former college baseball player who still spends time in the sports world as a journalist and podcast host. He has covered both the New York Mets and the UFC, and is the host of the comedy mixed martial arts “Middle Easy Fight Fist Podcast”. When not on the road, Dan is a regular at the legendary Comedy Cellar in New York City.

When other friends would listen to music during their warmups for big games, I would listen to stand up. I knew that meant loved it. When I got hurt, it was the only thing that made sense, because I knew it took a lot of time and work. As an athlete who lost what was his daily schedule, I needed a new one. I was nervous as hell the first time and ate it badly, a true bomb. But I was hooked. That was the neon sign of wanting to be a comic in my life.

The short amount of time I spent in college was as a psychology student. Something tells me that’s not where I would have stayed. A lot of the things I do in life are on a whim, I honestly don’t know what I would have ended up doing. I’d be holding in a lot more thoughts.

Gotham is a great place. It always feels, and is, professional. On the road, Zanies in Chicago is like a home away from home for me. It’s the club I frequent most on the road. My last album was recorded at both Zanies Chicago and Zanies Rosemont. Old Man Hustle in the Lower East Side is one of the most fun places to do sets in the city, very intimate and honest reactions. They also just opened a club in Brooklyn and are doing some cool things.

I’d say my friends Maggie Crane and Michael Terry, who both joined me on my last tour, are wonderful. Both had to deal with oddities along the entire tour and handles everything is thrown their way graciously, which includes Michael having to follow Gaffigan and Seinfeld dropping in the opening show of the tour at Gotham.

The material comes from life, live it

Zanies were the first club to put my headshot on the wall. Seeing that, it’s hard not to feel like you’re doing it for real.

If I know I need to get stage work done, I’ll try to get up 2-3 times a night, 6 nights that week. If I know I need to get writing done or enjoy life a bit, I have no issues taking 2 or 3-day breaks. Every comic is different and has to find where and how they produce the best. I like not beating myself to death in NYC, but on the road, I will. On my last tour, we did 28 cities in 5 weeks. I was doing hour sets each night, most nights of the week, in different cities and states. I like touring like a band.

Gotham is great, I run a monthly show at the SoHo Playhouse and that’s become a favorite of mine, I like Stand Up NY a lot.

With relatively peaceful jabs, until they stop OR until I find I have the crowd on my side and can get more aggressive with the heckler if need be

Find the peace with what’s in front of you

Who I am day-to-day and who I am on stage seems to be coming together finally. I like to think I’m very honest, I keep it light and thoughtful, yet there are some deeper explorations of life. Even if it’s through shorter one lines or pensive stoned thoughts. I do a lot of crowd work, especially in longer sets, not to eat time but to add to the narrative of certain bits. I find my comedy to be personal, sometimes intimate crowd work can make the bits I want to do hit a bit harder.

It’s hard not listing Hedberg first. Not only the jokes and the writing but the strength of his stage presence and how much trust those audiences on his 3 albums had in him. You can almost hear their adoration for him in their laughs. Zach Galifianakis: Live at the Purple Onion is a special that showed me a different side of comedy and one that I slowly start to dig deeper into. Greg Giraldo would be the third stand-up. Good Day to Cross a River and Midlife Vices are a CD and DVD I still own and use.

Delusion seems to be a prime factor in step 1, I was the basic class clown most of my life though, yes.

The new podcast and video show In the Aisle come out on December 2nd.