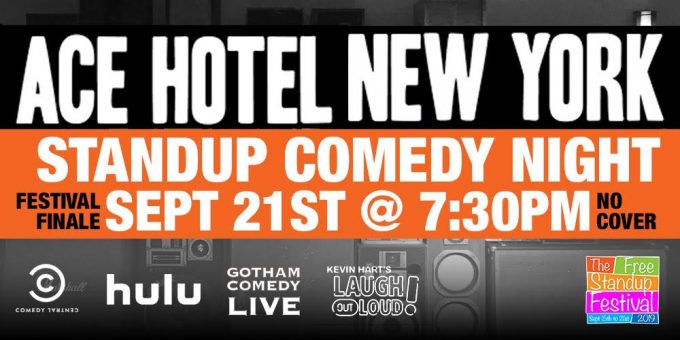 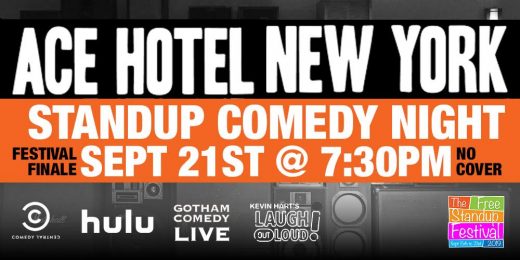 The Free Standup Festival is proud to return to the Ace Hotel New York as they host the 2019 finale show! Set in their chic, downstairs lounge, Ace Hotel is the perfect location to cap off the week-long festival. This spacious room with its art deco touches, low ceilings, and its massive wall of speakers is the ideal backdrop for a night of comedy.

Ace Hotel New York reinvents the urban hotel for the people who make cities interesting. They crave experience more than hospitality clichés. Their sensibility is democratic and inclusive. They appeal to a broad spectrum of travelers directly, without reducing everything to the lowest common denominator. Ace is built around collaborations and friendships with local designers, artists, and independent businesses.

Join us for this no cover comedy event in one of the most iconic hotels in New York City!

See you at the Ace Hotel New York! 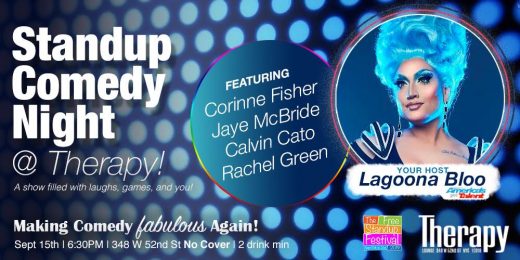 We kick off the festival at Therapy NYC on the westside! Lagoona Bloo, from Stephanie’s Child, is our fierce host for the evening. You’ve seen Lagoona and Stephanie’s Child on America’s Got Talent giving Simon a run for his money. Sit back but don’t relax, cause she’ll be your guide throughout the evening of laughs, games, and drinks.

Therapy NYC sits center aisle in Manhattan’s Hell’s Kitchen. Since 2003, they’ve been serving the community entertainment with happy hour specials and nightly DJs. Five nights a week they host some of the best drag performers in the industry. Many RuPaul’s Drag Race’s contestants and winners have had residencies here including Bianca Del Rio, Bob the Drag Queen and Monet X Change.

See you at Therapy!

About the 2019 Free Standup Festival

They say laughter is the best medicine, well, prepare to be very healthy!

For the past six years, the Free Standup Festival has showcased some of the best standup comedy throughout NYC, Brooklyn, and Queens. And 2019 is the best year yet!

From September 15-21, we have 15 shows that bring an amazing array of comedy from well-known bar shows, to clubs, to our features shows taking place at Therapy NYC and Ace Hotel New New York! Our comics can be seen on America’s Got Talent, Comedy Central, Kevin Hart LOL, and Hulu. Come laugh with us! You just may find your new favorite comic!

Our goal is to showcase not just free comedy but to introduce new shows, comics, and experiences. The Festival celebrates the diversity of comedy. How each comic brings their own individual voice to each show and punch line. We embrace comedy in all shapes and sizes. All colors. All of the crazy. And we invite you to join us.