All About St. Marks Comedy Club in the East Village I NYC Comedy Clubs 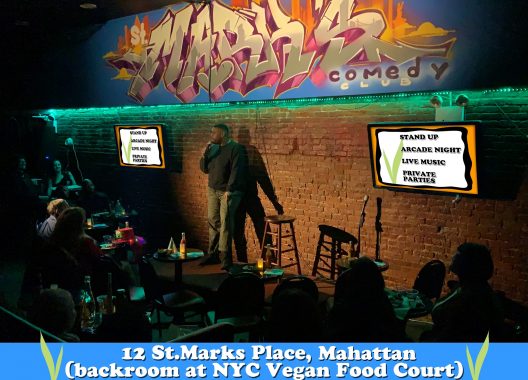 St. Marks Comedy Club is a speakeasy performance venue by the same folks who brought you Vegan Food Court and V-Spot in partnership with Ron Barba.

St. Marks Comedy Club is located in the backroom of The Vegan Food Court, in the heart of East Village in New York City.

NYC is the mecca of stand up comedy. St. Marks Comedy Club is one of New York’s latest comedy clubs delivering the best laughs. On any given night, you can see some of the world’s famous comedians. Some of these celeb comedians have been on Netflix, Comedy Central, Daily Show, movies, and everywhere extraordinary comedy is. At St. Marks Comedy Club, you just never know who you will see or who will just do a celebrity guest drop by.

This new comedy club’s profile is growing for its penchant of giving fresh comedic talent and several rising stars a platform to launch.

If you are looking for a great comedy club in East Village, St. Marks Comedy Club has got you covered. From live comedy shows to video game night, musical performances and private parties on a 100% plant-based food & drink menu

Alex Carabaño is a stand-up comedian and showcases his comedic abilities from time to time at the club.

About Alex Carabaño and VSPOT

Alex is also the owner of one of the top Vegan Restaurants in NYC – The VSPOT. Established in 2006, this restaurant has served New York City ever since.

Alex Carabaño also added his brother Danny Carabaño, and business partner Steven Simicich to the restaurant. Together, they transformed the business from the menu to the mode of operation. Their mission is clear. To provide 100% vegan, organic, healthy foods that are colorful, bright and full of flavor.

Their foods are Kosher certified. As a result, their menu contains an organic arrangement which is home-made Colombian dishes and incredible sauces!

The second restaurant started in the East Village in 2015. This brought more brought opportunities with an event space called “Brickspot Comedy.” It is in this back showroom they started hosting stand up comedy shows and offering a fully organic menu.

Alex is doing well as a co-owner and New York City stand-up comedian. He won $1000 on BET’s “Apollo Live” at their legendary theater in Harlem.

He also won the “Lottery Show” at the world-famous Comic Strip Live hosted by VH1 at Comedy Cellar. This held in front of judges Bonnie, Rich Vos, Richie Tienkin, and Seth MacFarlane.

As a result of owning the restaurants, he has been invited to “The Job,” a CBS reality show. He appeared as a veggie chef on Telemundo morning news. He made appearances on “Good Eats,” the ABC Eyewitness New’s segment which featured on “Taxi TV” airing in all NYC taxis.

Alex had a monthly comedy show produced monthly at his Brooklyn restaurant. Moreover, it listed on the “Top 10 Brooklyn Comedy Shows In Brooklyn.”

He is a regular at venues across the city.

If you are a performer looking for stage time, please do not contact the owners of the venue, just review our schedule & contact the producers of each show.

If you are a musician, poet, singer or anyone looking to produce a show or private party, please DM us on Instagram @NYCveganfoodcourt