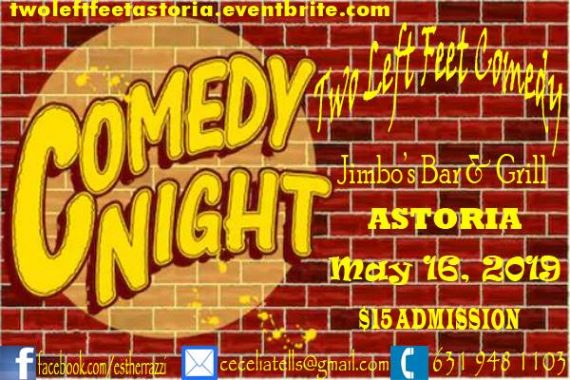 Are you looking for plans for your Thursday night? Want to change up your routine of hitting up the bars and clubs and do something new and exciting? Come out and enjoy Jimbo’s Bar and Grill Astoria, Esther Razzi NYC Comedy Show! Be a part of the most humorous experience of a lifetime. Esther Razzi Comedy, the premier producer of comedy shows in the tri-state area, is putting on the show, Two Left Feet Comedy Night. Experience jumbo sized laughter at Jimbo’s Bar and Grill. The talent included in this lineup is so ridiculous that you will never second guess coming to this show! You will be amazed at the level of humor that these human specimens are able to produce, with a woman who looks like one of the golden girls, a guy called nine volts, a man renting an apartment from a 90-year-old stripper, and a woman who has her mother in law in the trunk of her car, these comedians are bound to be hilarious.  The headliner is Sharon Simon but you won’t need to obey the command Simon Says laugh for her set because her jokes are just that funny! Esther Razzi NYC comedy show loves to riff about how she is self-conscious about her name, Esther and how she has experimented with a new name.  When Thursday night rolls around you’re always strained and tired from that rough work week. We’ve all been there. Your boss practically screamed at you, you weren’t able to meet any of the deadlines and you were passed over for that promotion. You’re pretty sure that your significant other is about to break up with you and what do you know the local pizza place just raised their prices. Life is hard! So what’s a better way to deal with all the stress in this thing called life than to see a comedy show. It’s really true that laughter is the best medicine for anything. After the comedy show, you’ll feel like a new person. Suddenly that headache you’ve had will wilt away and it won’t feel so awful that those jeans are just a little too tight. You’ll even feel like you can ask that crush out that you’ve been intimidated by.

So… you’re probably hooked and eager to see the show. Here are the deets for the show. The show is at Jimbo’s Bar and Grill which is at 3005 Astoria Blvd in Astoria. It is located conveniently near the subway. Ample parking is available in the area as well.  Jimbo’s also serves delicious food for your consumption. Who doesn’t want a nice and a juicy hamburger with sizzling fries while you laugh your tail off? Admission to the show is $15 if you buy in advance and $20 if you buy at the door. To buy click here. For more information contact Esther Forrester at 631 948 1103 or email [email protected]

For more information on her shows and background go to www.estherrazzicomedy.com.

If you are looking for some great laughs there is no better place to find tickets than our website.