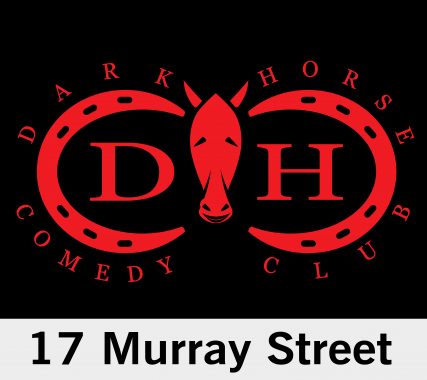 Dark Horse Comedy Club is located in the heart of Tribeca, Lower  Manhattan,  New York City. Adam Strauss, Tribeca’s most legendary comedian, performs here regularly and his name is pretty much synonymous with Dark Horse. This  NYC comedy club is famous among the locals due to its professional setting,  spaciousness, full bar, extensive menu, and hilarious comedians.

The Dark Horse Comedy Club features the best and most comprehensive food and drink menu of all comedy clubs in New York City as well as a full bar. Most clubs treat food as an after-thought, something that is required to be offered as a means to make their quota, but not Dark Horse. Here you have a wide-ranging menu of tasty food and delicious drinks to choose from. Over sixty mouth-watering selections exist on the menu. From hamburgers and french fries to sirloin steaks and cheesecake, the Dark Horse has some of the best food in town. This club has a typical bar setup, unlike many comedy clubs, with plenty of room and TVs to watch the game on before the comedians take to the stage.

Dark Horse stands out as a comedy club because of its professional atmosphere and great food. There are booths to sit at, impeccable service and some of the best comedians in all of New York City. The minimum age to attend a show is 16 unless accompanied by an adult. Getting to Dark Horse is easy.

New York’s rapid transit takes you right to the club. Parking is not a problem. Free parking is available in many places near the Dark Horse. But, just in case you can’t find a spot there is a paid 24-hour parking lot only two blocks south of this club.

The Dark Horse is one of only a few comedy clubs that exist in Tribeca so they attract only the best and funniest comedians!