Download the FREE Best Comedy Tickets App! With, the app you Find the comedy shows and get access best comedy shows in New York. You can get your tickets and scan it right on your phone at each comedy club for easy admission. Use the app to stay up to date on who is performing comedy in the city. 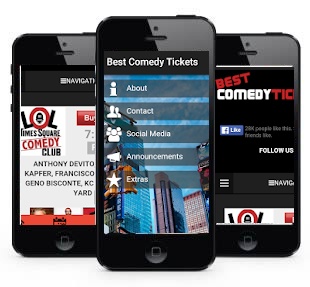 The Best Comedy Tickets® App is a useful, guide to New York City comedy shows specifically designed to help comedy fans make the most of seeing the best shows in New York and getting the most out of their pass.

TOP TIP: SYNC YOUR BEST COMEDY TICKETS WITH THE APP TO GET EXCLUSIVE ON-THE-GO UPDATES AND PUSH-NOTIFICATIONS ON EXTRA DEALS AND DISCOUNTS IN THE AREA