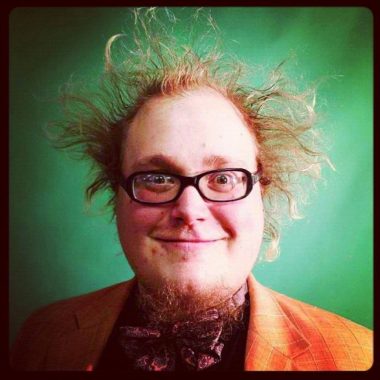 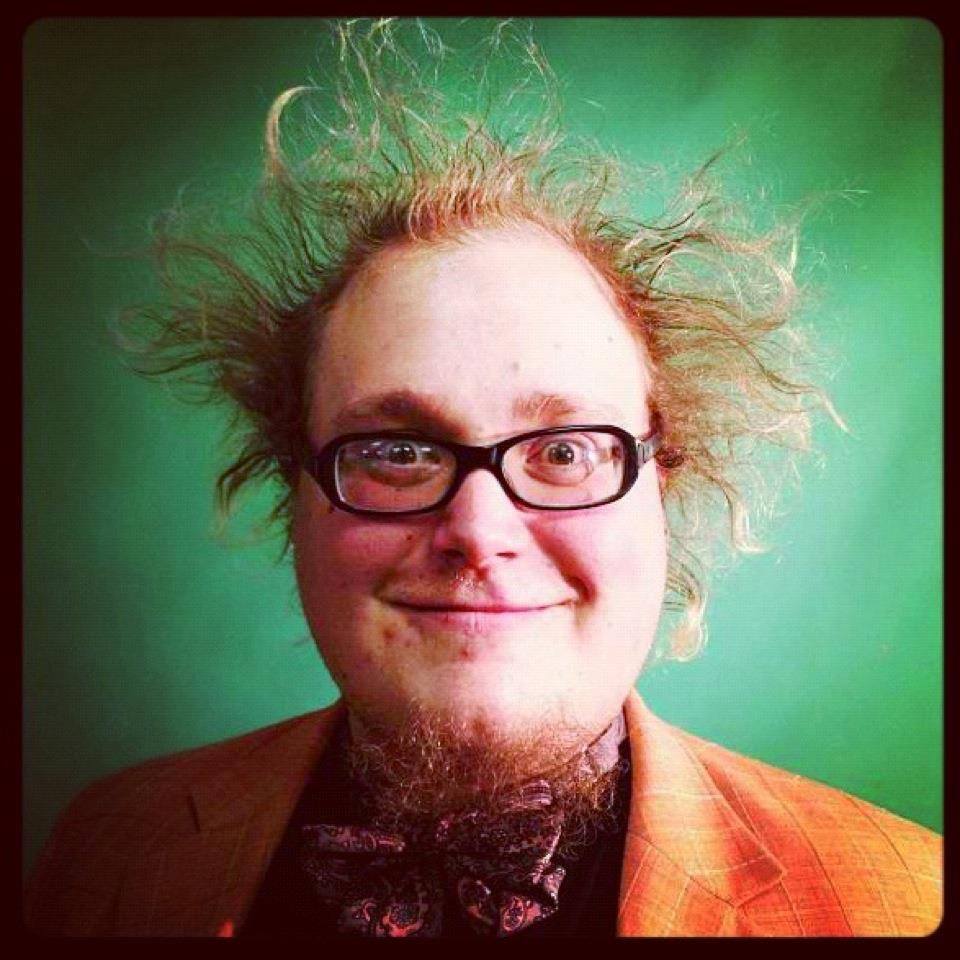 Zac Amico is definitely making a name for himself as of late, especially in the comedy community. Zac had been doing comedy around six years, which by most standards is not long at all. But with the popularity of Roasting coming to New York, Zac is a force to be reckoned with.

I had become familiar with Zac Amico through a podcast I listen to regularly, The Real Ass Podcast. Real Ass Podcast is a weekly show Luis J Gomez had started and quickly brought in Zac and fellow comedian Chris Scopo. Recently Luis added another comedian Kris Tinkle to the roster. Since creating the setting of comedians sitting around throwing jabs at one another, it had become incredibly clear that Zac had a true natural talent. Luis has been hosting a show at The Stand called Roastmasters, which is a regular show at The Stand where two comedians go head to head in a Roast competition. Similar to the famous Comedy Central Roasts but this is strictly head to head.  This original Roasting show in the city is backed by the Roastmaster General himself, Jeff Ross.

I had the honor of attending a Roastmasters championship show during New York Comedy Week, and it truly is a show people need to experience for themselves.  But on a different night two regulars on Luis’ podcast went head to head, Zac Amico and Kerryn Feehan. And the outcome I can’t describe instead feel free to watch.

This video had been a few months ago and had received normal traction online, but now through the spreading of multiple outlets this video had been catching some major, well deserved traction. I met Zac at a local coffee shop to sit and chat.

“I was always a huge comedy fan growing up, I think the biggest thing was watching my parents laugh watching comedy. I think the two comics I remember the most were Kevin Meaney and John Pinette and I remember my parents quoting them all the time and I learned to do a bunch of their bits. So, I used to do ‘That’s not right!’ and I used to do that to my parents as a kid.”

When did you decide to start doing standup comedy?

“I started in 2009; I was taking a class at NYU on the History of Comedy. The final was either do a ten page paper, or do five minutes at Eastville Comedy Club.  I decided to do five minutes at Eastville, it was a showcase show that Big Jay Oakerson closed and I got to go on right before Jay who was, and is, one of my favorite comics. His manager at the time approached me and asked if I was really interested in doing comedy and kind of set me up in a path where I could. I then got into comedy more on the business side I sold tickets for and worked the door at CB’s Comedy Club for two years where I got trained by Luis and from there I was always tagging along with him from there we became close friend. ”

And is that how Real Ass Podcast came about?

“Yeah, more or less, Luis wanted to do his own show, I had kind of been hanging out with him for a while. We had kind of a good repoir and wanted to see if it would work out.”

What lead to you writing and participating in Roasting?

“Luis had realized that I had a secret talent for making fun of him that I could eventually apply to other people. My first Roast writing gig was actually for the Roast of Big Jay, Luis hired me to help him and I wound up sending him about thirty five jokes that I had already had done because I had heard they were doing this and it was already in my head I was going to be writing for this. So I had wrote a bunch of jokes for Luis and wound up getting hired to help write for Anthony Cumia, Sal Vulcano, and wrote most of the set for Jay’s wife, Carla. So from there I had gotten a decent amount of roast writing just from that.”

Has writing for these Roasts opened up opportunities to write for other projects as well?

“I write a lot of roast stuff, it has allowed me to start submitting for other stuff. I recently started to do some punch up for some pilots. I’ve submitted packets for shows still hoping to get my foot in the door on that. I’m starting to slowly developing it into other things.”

So then how the battle between you and Kerryn Feehan come about?

“Kerry has been a semi regular on the podcast for a while. Patick Milligan, who books the Roastmasters had wanted to work me on it for a while since he had heard I been writing and helping out others with their roast sets. It was Luis’ idea for me and Kerryn to battle and went really well in my favor. But, what I think people don’t realize we are friends. If people don’t like each other it never comes out funny. It’s the comradery that goes back to the Dean Martin Roasts, you can tell they were all friends and that’s why it’s fun. I do wish more people that watch the video realize that Kerryn and I are friends. Unfortunately, there’s no context but I’m also not going to turn down having all these people know that I’m a comedian.”

The YouTube video had been catching a lot of attention for about a week prior to us sitting down.  So much so that the video had quickly moved from around 1,500 views and almost overnight reaching over 100 thousand.  Since then the video had reached over 300 thousand views. Zac feels a lot of that attention came from his recent guest appearance on The Anthony Cumia show on Anthony’s own subscription based platform. And from there the Reddit community grabbed on and had very quickly spread to other social media outlets.

Outside of comedy, Zac has also been involved with a pretty well-known Independent film company called Troma Entertainment for a few years now. Troma, are the B movie monsters they have produced and distributed upwards of a thousand movies since it’s creation over 40 years ago. This company is everything in its over the top nature with their probably most recognizable project being “The Toxic Avengers” series. Zac had recently Assisted Directed in the last few of their features including upcoming “Return to Nuke ‘Em High Volume II”, so I was curious to see which way he’d like to take in furthering his career.

“I do like the writing and I like the backstage stuff a lot, I love doing stand up. I would like to be a film maker who tours with his movies, like Kevin Smith does, and be able to do a spoken word. Again, very much like what Kevin Smith has been doing now.”

I feel during the first “Comedy Boom” there was very much a segregation of the arts, actors acted, producers produced, and stand ups did the clubs. But now, there is definitely a resurgence of a “Comedy Boom” but I think that lined has become far more blurred. And a lot of that has to do with the availability of content. Zac and I briefly discussed this to where he added.

“Especially with technology being the way that it is, everyone having access to make their own content. I mean, if you look back Louie C.K directed ‘Pootie Tang’ he created other features as well. And now that he’s more recognizable he gets to do that again with his own projects and now this new one with FX. That for me was the most inspiring, that and someone like Patton Oswald who can go do an Indie movie and just go to stand up. You can be a lot of things and not just need to be a stand up.”

Do you think now with everything being so accessible that the former path of finding an agent manager, etc., is still needed today?

“Barry Katz said it best, ‘Make yourself undeniable’ and I feel that’s the same way. If you’re funny enough and around enough people will notice, and if you’re good enough people will want you around. I think the important thing is to have friends who are also in the industry that you want to be around that’ll force you to become better. If you hang around people who suck, it’s going to make yourself suck too. You’re never going to challenge yourself. And unless you’re actually out, getting laughs, trying, and taking big risks you’re not going to develop as a group. For me, I owe Luis J Gomez a ton to he’s just such an important part of my career where he pushes me. I think he felt a little stagnant a few years ago and when he was challenging himself he also started to put that pressure on me to get funnier and make more stuff and do more in the business. It takes a lot of drive, creativity and personality, especially comedy has to have a big personality. People have to empathize with you at some point in one way or another, or at least have to admit how great you are”

Check out Zac Amico on Facebook and on Twitter and Instagram as @zacinnotfunny. He is on the “Real Ass Podcast” live every Friday at noonish with Luis J Gomez, Chris Scopo, and Kris Tinkle and available shortly after on all platforms that someone can find podcasts. If a fan of horror, check out his movie coming out soon “Return to Nuke ‘Em High Volume II”. And on February 2nd 11pm at The Stand Restaurant and Comedy Club in Gramercy, Zac is taking the stage again in what is sure to be a crazy Roastmasters hosted by Luis J Gomez.