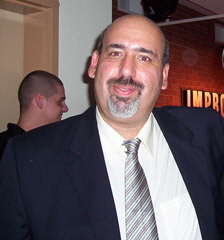 New York City is the mecca of stand-up comedy. If you want to be a successful comedian, the city offers endless opportunities to get on stage night after night. The clubs in the city are legendary, and all of the top comedians have performed at them. No one knows this better than Al Martin, owner and booker of Broadway Comedy Club and Greenwich Village Comedy Club, two of the best venues in the city. I had the honor to pick the brain of Mr. Martin to learn about the ins and outs of the club business, and how it works within such a vibrant community.

JR: So, I guess I’ll ask the most obvious one first, how did you get into comedy?

AM: I was working a regular 9-5 job and I was dating a comedian while doing it. One day we got into an argument because she kept telling me how good she was and then I saw her and thought, “you’re not very good.”

JR: And she got mad.

AM: Kind of. She actually said, “Well if you’re such a smart ass, why don’t you get on stage?” So the next week or so I prepared a set. I was all prepared to do a spot, then Andrew Dice Clay came in and bumped me, did a 45-minute set and absolutely demolished. I bombed horribly, but in the green room I had a great time talking and bullshitting with all of the comedians, and that’s why I decided to stay. Then I tried it the following week and then the week after, and it sort of just stuck.

JR: So how did that lead to running a couple of clubs?
AM: Back when I was first starting out in the 80’s, there was only one way to get stage time and that was to audition. There was a little comedy room on 42nd street inside of a Houlihans that I barked for, which was how I initially got my stage time. One night, there was a riot in front of the Houlihans, so they stopped all outside produced shows. So I started searching for a place to run a show myself, and I came across an Irish pub that had a sign on the 2nd Floor, “New York Comedy Club.”

JR: Oh so New York Comedy Club started out there?

AM: Yes. Jay Mohr and Chappelle’s old comedy manager, Barry Katz, worked there. So I met Barry there and said hey I would love to work for you and fill the seats for some stage time, and shortly after I was barking for him. After working there I found out the owner of the bar actually owned another pub in Greenwich Village called Boston Comedy Club. He couldn’t replicate the success at Boston Comedy Club that he had at New York Comedy Club because it had 50-60 people every night from me barking. I was working there for 4-5 years and bringing them all the business and not getting much in return. I wanted to take it over myself. I told the bar owner this, and I bought the name off of him for $10.

AM: Not the whole club, just the name.

JR: Got it.
AM: So I stayed there for another 5 years, it was going great. Eventually one day the bar owner stopped paying rent so they closed down the place. I reopened New York Comedy Club in 1994 on 24th and 2nd. Then in 2003 I opened Broadway Comedy Club. I was the first person in Manhattan with two show rooms.

AM: NYU bought it for dorm space. Then in 2007, Broadway Comedy Club became the first comedy club in New York with three different show rooms. I was running that for another 5 years, and then in 2012 opened up Greenwich Village Comedy Club.

JR: How do you choose which comics you book at these clubs?

AM: Really it comes down to one thing, talent. If I think you are good enough to make my audience laugh, I will book you. The really talented comedians get to headline and feature during prime spots; the guest spots go to people who have worked with me internally. So people who have interned or are working within the club, those are the people who get guest spots. You have to pay your dues.

JR: If you have not interned, is there any other way to get a guest spot and work your way up in the club?

AM: This year we actually brought back an old New York City tradition and gave open auditions at Broadway Comedy Club. You could come to the club, put your name on the list and sign up to get a chance to perform. This was not a bringer show it was an actual audition. Over 400 people lined up for the lottery. It was really something special to see.

JR: And this will keep happening? These open auditions?

AM: Yes, we have auditions scheduled through July of 2016 already.

AM: No, you have to go to the club and do it in person. In the future it will be online, but as of now, it is just at the club. Initially it was going to be only at Broadway Comedy Club, but so many people came that we did it at Greenwich Village Comedy Club as well.

JR: Do you prefer the comics to work clean?

AM: As long as you’re funny, you’re funny. It doesn’t matter what style. Most clubs in this city are trying to develop the sitcom stars of the future. I’m different. As a club owner, my first and most important thing is entertaining people at my venue. Do you get strong laughs? For Greenwich Village, because it attracts people from New York, I like comics who are a little edgier and have a little grit. Broadway Comedy Club is mostly tourists from the Midwest, overhead states etc. The comics there try to be a little more conservative. They definitely do not like the dirty style there or blue humor. They tend to like cleaner comedy. It’s a totally different dynamic. I personally don’t think it matters whether you’re clean or not. I don’t want you to say, “fuck” 26 times, but I don’t mind if you use a curse word to make the bit better. One thing I will say is do not talk about disgusting topics the whole time. My audience is ordering food and drinks, so they don’t want to hear that.

JR: You’ve probably been asked this a million times, but which comics were your heroes growing up?

AM: Rodney Dangerfield was my favorite. He was just a purely funny guy. A lot of these new guys have dark humor, I’m not against it, but I just like the purely funny guys. Jackie Mason, Joan Rivers may she rest in peace, Kevin James.

JR: I love Kevin James. Sweat the Small Stuff is one of the funniest comedy specials ever.

JR: Do you have any advice for comics just starting out?

AM: Look at comedy like you are going to school all over again. Be prepared to do open mics for the next four years, at least. You have to be prepared. Have material already written down. Work as hard as you possibly can. Do every spot you can no matter how good or bad you think it is. Just do everything you can. Any opportunity, everything. You want to be number one in your class? Work the hardest. There is no quick fix. There are no shortcuts. Are you looking to get on stage in a year with a big TV contract? You’re delusional. Don’t even try. The people on my stage have been doing this for 7 years at least. Look at a guy like Dave Attell, he didn’t just get on stage and get a TV show, he put in the work. If you are really just starting out, comedy classes are a good way to get your feet wet.

JR: You think comedy classes help with the beginning stages?

AM: They do help, but only for about 6 months to a year. Young comics make the mistake of thinking that after a year of taking comedy classes, they are ready to headline. Please don’t believe you can headline any club in New York City doing only that. It takes a ton of work. Not any club is ready to just book you.

JR: Okay last question then I’ll stop bothering you. What is your favorite joke of all time?

AM: Hahahaha. Oh man. There is no right answer. There are too many good ones.