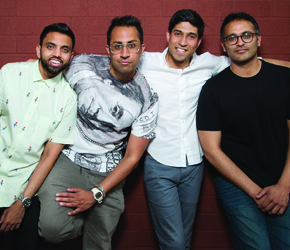 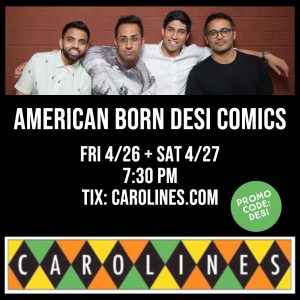 It all started in a Whole Foods at Columbus Circle where several Indian comics would come together for a writing session and ramen. After several of these sessions (and several bowls of ramen), comedians Akaash Singh, Tushar Singh, Alingon Mitra, and KC Arora decided it was time to do shows together. That was the creation of the American Born Desi Comics (ABDCs)

The Deep South Tour was a smashing success with shows in Pittsburgh (not so south), DC, North Carolina, Georgia, and Alabama. The tour even introduced closer to the show where all four comics would take the stage along with questions, guests and hilarious riffs.

After the successful Deep South tour, the ABDCs decided it was time to go back to where they were “really from” and do shows in India. The ABDCs were met with open arms as they had FOUR SOLD OUT shows in Mumbai, India.

Now the American Born Desi Comics are coming back to Caroline’s on Broadway to shows on April 26-27 (both at 7:30 pm) along with special guests.

Be sure to get your discount and use the promo code: DESI

To find out more about Desi Comics show at Carolines go to this link https://www.carolines.com/comedian/american-born-desi-comics/

Thanks for reading  Desi Comics Comedy Show at Carolines on Broadway.

If you like to see an NYC Comedy Show we like to offer you a 20% discount to all NYC Comedy Clubs that are featured on our site.