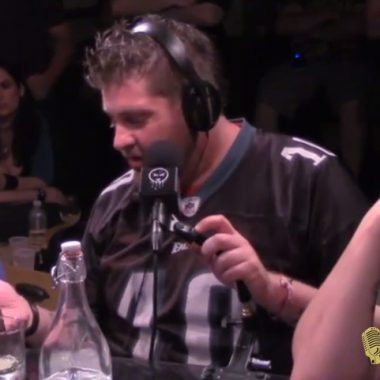 It’s no secret that Big Jay Oakerson is a natural with crowds; looking perfectly at home in almost any comedic setting, include his comedy shows in NYC. He’s one of the funniest comedians in the country. So what’s the best way to pop the champagne and celebrate a comedian’s milestone with one of comedy’s biggest up and comers? Big Jay’s agent and the co-hosts at the Podcast “Legion of Skanks” decided to ambush Big Jay with some exciting news, live during one of their legendary podcasts.

Hat tip to The Anthony Cumia Show for posting this epic moment on their YouTube Channel:

Check out the video to see the moment Big Jay learns about Comedy Central’s decision to feature him in his very own one-hour special!

Also in the shot, you’ll see a few of our favorite comedians; Luis Gomez and Dave Smith. Real-life best friends and fellow stand-up comedians, who together with Big Jay, co-host the wildly popular Legion of Skanks Podcast.

Dave, seen in the video handing Big Jay the phone with his agent on the line, is another talented stand up comedian at The Stand NYC and member of the Internet Generation.

Luis Gomez, Big Jay Oakerson and Dave Smith are the dynamic, off-the-wall comedy trio that keep the “Legion of Skanks” podcast fresh and engaging; bravely performing their show with a live audience.

Seriously, how many podcasters can pull that off? Definitely a phenomenal crew with great material and serious podcast chemistry.

You can subscribe to the “Legion of Skanks” podcast on iTunes, or check out their website for more details.