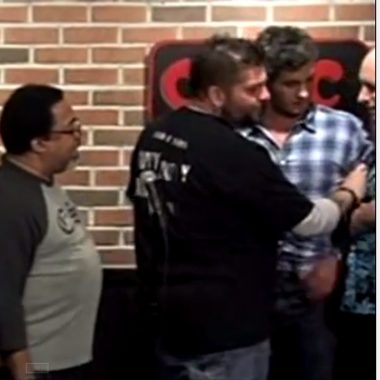 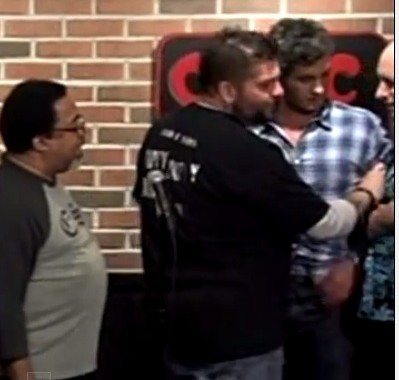 Big Jay Oakerson recently he  stated in his social media that  a confrontation took place at  The Comic Strip Live comedy  club located on the Upper  East Side. He said that  William Stephenson, another  stand up comedian, was the  host and a couple in the  audience was heckling Mr.  Stephenson and were being  some disorderly. After  Stephenson got fed up with  that couple, a verbal  fight took place. Stephenson,  being older than the women boyfriend, almost came to blows. The security of the club did nothing and Oakerson decided to step in to stop a potential fight. The owner of the club freaked out on him, banning him not just from the club but also threatened to call other comedy club and convince them to do the same.

Then Big Jay Oakerson took things to social media, something that he admits not to use that often, and he also posted not a relay of what happened but also the text messages that were sent to him by the owner of the comedy club. The message pretty much sums up his anger, telling Oakerson that he have some pair of balls to take his money for performing that night at the club and then say things about the Comic Strip Live. He will never be allow to perform there again. He also said that the customer sitting, who was with hecker should have beaten both comics Williamson and Oakerson.

Oakerson calmly replied that the Comic Strip Live staff just watched while he went to protect his follow comic from a member of the audience who step on the stage and was ready to hit long time comedian William Stephenson. He also said that he feels sorry for what happened to the business that used to be so great and he took the money for doing his job.  That he was able to do and acting as the bouncer that was never present in the Comic Strip Live, considering that they serve alcohol.

The club owner replied again that the reason why the club turned into a dump is because of people like Big Jay Oakerson and William Stephenson who brought the clubs to the ground. He said that Oakerson is no Eddie Murphy and that other owners will be interested to know what Oakerson is capable of.

The owner replied again with some insults and saying that Oakerson should never defend an MC who called a woman a cunt and if there was indeed a bouncer, he would have told him to leave the room and allow the woman’s boyfriend to beat William Stephenson.

Oakerson said that when a member of the audience is being unruly the whole duration of the show and messing up with the club not doing anything, the comic has the right to say whatever he wants.

This confrontation was caught on video by The Comic’s Comic (see below, and read more here), released on YouTube today. The video shows Stephenson doing a raffle and getting in a confrontation with an audience.  You can also see the woman’s boyfriend stepping up on stage, and Big Jay intervening and stopping the fight from happening.

Big Jay Oakerson: I actually said hi to you b4 the 2nd show when that all happened… Your staff watched me have to go protect a comic from a charging audience member. Unacceptable!! Lol, you think that’s the way it should have been handled? Honestly?? It’s a shame you don’t see what has happened to your once great business. Unemployment line for me? Doubtful, but give it a shot! Also, I took money for doing my job (which I did) AND the job of bouncer, which you don’t have anymore, in a business that serves alcohol.

Club Owner: Ok l will if u think the club has become a dump its because of assholes like u and william that bring clubs to the ground.believe me ur no eddie [email protected] or jerry sienfield or adam or ray or larry and u know it.personally l think the other club owners would be very interested to know what u are capable @of.

Club Owner: Who the fuckare u to think u can defend a mc that calls a women a cunt.trust me if there was a bouncer.l would have told him to leavethe room and let [email protected] boyfriend beat the crap out ofwilliam and u also.do u think it went over well with the audience.william and u both look like assholes even the other [email protected] are talkng about it dont bother me anymore.let comedy central think your great. (Lol, he texted me!)

Big Jay Oakerson: I think when an audience member is being unruly for the whole show and fucking it up, and the club does NOTHING about it, a comic can say whatever he wants. You wishing violence on a comic from the audience is one of the dumbest things I’ve ever heard a person say! Do you really feel that way and think that people are gonna get behind that? Cmon Ritchie, you gotta be wiser than that buddy! Thanks for the vote of luck with Comedy Central… I’ll keep you posted.