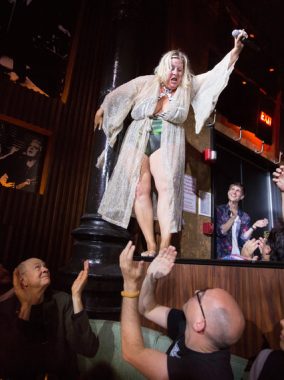 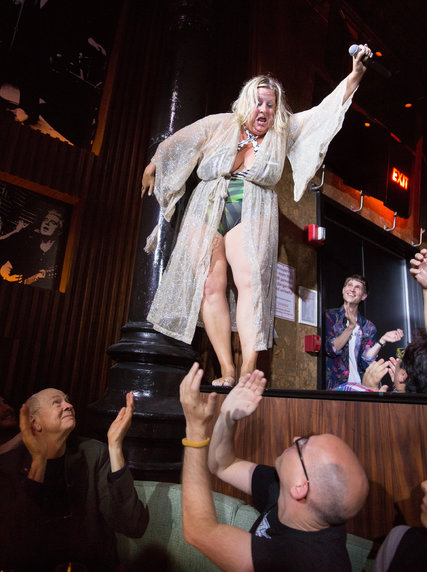 If there’s one comedian who is taking the world by storm now, that  would be none other than Bridget Everett herself. With her special  feature in the Vogue Magazine, festival crowds all over the country  that clamors for her presence, an appearance in the forthcoming  film Trainwreck and Amy Schumer declaring at the end of her best  and biggest season of Inside Amy Schumer that Everett is her  favorite performer, this comedy superstar is bound to see the best  of the best of her career yet.

However, if you really want to see Bridget at the peak of her performance, all you need to do is visit Joe’s Pub in NYC where you can experience how it feels like to see Blondie at CGB and Billie Holiday at Apollo back in the early 70s.

Every time Bridget takes the center stage, you wouldn’t even feel that you are at the heart of New York. Instead, it will feel like you have been transported right at the heart of the world of entertainment. The hottest celebrities including Sarah Jessica Parker, Jonah Hill, Ben Stiller, Justin Vivian Bond and Amy Schumer herself all have nothing but praises for Bridget’s past performances.

A visit to Joe’s Pub will give you the chance to witness first hand her smash hit show, Rock Bottom, blowing off the doors of this legendary venue. Every second is electric and each number was a showstopper, making the crowds go wild.

Bridget has this unique way of connecting with her audience, something that can make any person in the room feel like she is directly singing to you, and you will be mesmerized and drawn to her performance, both figuratively and literally.

The brash and bawdy comedic musical numbers of Bridget are the main reason why her shows are always sold out. They are hilarious, shocking and performed with such great power at the same time, with her signature physicality and stellar vocals. And while she never labels herself as a comedian, the stories that she easily weaves between every musical number will make you fall out of your seats, doubling out in laughter.

Her backup singers and her band also perform with flawless sophistication, and this alone is reason enough for you to attend Bridget’s show. She also has a one of a kind costuming, something that you will never see anywhere else.

There’s no proper description to best describe Bridget so you can expect that you will be surprised each and every time. The participation of the audience is given an entirely different meaning at the shoes of Bridget, with the interactions being so shocking that you will end up wondering if her target are actually plats. But they are not.

Bridget Everett is definitely among the biggest reasons why more and more people are now relocating to New York City. The mere knowledge that there is still a chance for one performer to grow, improve naturally and reach the highest point of greatness is almost like a tradition to this city as Brooklyn Bridge or Wall Street.