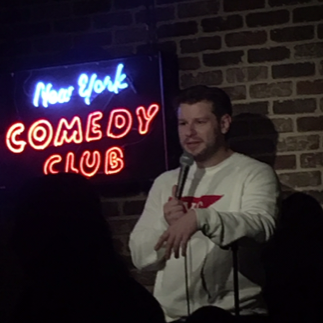 It was a Friday night at the New York Comedy Club, at 241 E 24th St New York, NY 10010b/t 3rd Ave & 2nd Ave in Kips Bay in Manhattan. It was the prime time show and the club was completely sold out with people from around the world.
That night we met up with Stand up Comedian Chris Scopo after his comedy show. We discuss being a comedian and doing stand up comedy.
Chris had the privilege of joining one of the most popular podcast’s in the country, Robert Kelly’s “You know What Dude” podcast. Where he learned valuable lessons in life and comedy. Since joining the podcast, Chris worked his way to become Producer of the show, a title he currently holds. Along with the YKWD podcast, he also is the co-host of Luis J. Gomez’s “Realass” podcast.

1. What other jobs did Chris Scopo do before starting stand up comedy?
-My first job right out of college was working in an office from 9-5; it was one of the miserable things I have experienced.

2. How did you know you wanted to be a comedian?
-I don’t think I ever knew I wanted to be a comic until I was actually doing it. I remember watching Dane Cook Vicious Circle when I was a kid, my brother and I used to quote that special all the time. I thought it was a cool job but never in my wildest dreams did I think I would do that for a living.

3. If you weren’t doing comedy, what would you be doing?
I would probably be working a normal job in finance or sales making a lot more money and going through everyday life. I wouldn’t know anything about the comedy world or what attracted me to do this job.

4. Where are some of your favorite places to perform?
– My favorite place to perform at in NYC is New York Comedy Club. The whole entire place has changed over the last few years and is now welcoming to all comics. Emilio Savone and Amy Hawthorne really care about comedy, not just by being great to all comics but they want to make sure the patrons have the best time possible. Laugh Boston is a great club to perform at, also Laugh It Up in Poughkeepsie is a newer club but they are great to all the comics that go there.

5. Who are some of your favorite up-and-comers in the comedy world?
– There are so many funny comics in New York its unreal, my roommates Alex Pavone and Mike Albanese are two of the funniest guys and have given me some of the biggest laughs in my life. Other comics that I see perform a lot and are on the rise are Rosebud Baker, Brendan Sagalow, Eagle Witt, Maddy Smith, Jeff Scheen, Napoleon Emill and so many more. This city pushes you to become better and better because we see other comics improving which helps us improve.

6. What’s the best advice you’ve ever gotten?
– The best advice I have ever received was “to just keep showing up”; an older comic told me this, which was passed down from an older comic. In this business you will see comics you started with or ones you have met start not coming around as much, whether its missing a spot because they didn’t want to come into the city or choosing to go out with friends. If you prevail through that and focus on becoming funnier good things will eventually happen for you.

7. When did you feel like you were a pro comedian?
– I don’t know if I will ever feel like a pro comedian because its still crazy to me that I get paid to talk about things I have made up in my insane head. I do remember the first time getting paid to do comedy in NYC, which was a big deal for me because its way harder to get paid spots here then on the road.
8. How often do you perform comedy per week?
– It depends on the week and the amount of shows I have but I usually like to get up 8-12 times a week. If I could I would perform 30 times a week, the more stage time you get the better you become.

10. How do you deal with hecklers?
– I’m not even sure there is a right way to deal with hecklers; it’s honestly a learning experience every time some know it all opens up their mouth. Sometimes hecklers will get the best of you but just remember what you did wrong with them and the next time you will be better equipped to handle them. An older comic once gave me advice on dealing with them, he said, “you talk for a living but at that moment let them talk their way into saying something stupid which is when you pounce on them.” I try to remember that as much as I can when I’m having a joyous conversation with a Douche.

11. What advice would you give your younger self?
– Hang out at shows more even when you aren’t on them, be open to doing any type of show possible. Don’t take anything that comics say to you seriously because 99% of the time that are just staying stuff to get a laugh. Comics are Dicks but most of them have the biggest hearts in the world.

12. How would you describe your brand of comedy?
– I (Chris Scopo )usually make fun of myself, whether it’s my New York Accent or that I have a really big ass. Older comics made fun of me so it kind of forced me to be open and talk about it, doing that really helped my comedy grow.

13. What do you talk about in your act?
– My act is constantly changing which helps me grow as a comic because it forces me to write more, which is better for my act. Now I talk a lot about my parents, going through a break up and not being the smartest person in the world.

14. How did you develop your style of stand up? Who were your influences growing up; both from the world of comedy and elsewhere?
– I (Chris Scopo )am not sure how I developed my style of stand up I just thought of things and tried them out, if they were funny I kept them. I also have a very heavy New York accent and most people think I’m always angry but its just how I talk, I can’t help the fact that I always sound like I’m an extra on the Jersey Shore. I try and show my New Yorkness during my set because that is whom I am and I don’t want to change that. When I was growing up Michael Jordan was a hero of mine, how could he not be I grew up in the 90’s. I am also a die-hard Met fan which I have to live with everyday of my life but Mike Piazza was my favorite player as a kid, so much I actually followed him home one day from a spring training game, creepy I know. When I got into comedy I really liked guys like Bill Burr, Robert Kelly and even though he passes away about a year into my comedy career Mike Distefano. They are all very up in your face type comics and grew up in the east, which breeds just a tougher type of comedy.

15. I love to interview comedians, Can I ask what happens when you are in front of a crowd, and no one laughs?
– When I am bombing in front of a crowd and I have comic friends in the back I know they are having the time of their lives to my expense because comics are dicks but I would do the same. When you are on stage and no one is laughing it doesn’t matter the temperature of the room, you just start sweating bullets for no reason. All you can do is just power through the set and when that red light comes on it’s like you are lost at sea and finally see land. Honestly, when you are young you take it to heart because you think that maybe you just aren’t funny but once you get past that point it doesn’t matter, EVERYONE BOMBS.

16. What made you decide to be a comedian? Were you born funny?
– I just wanted to be able to wake up on a Wednesday at noon because I didn’t have anything to do, plus I hated working every day. I was always a quiet kid when I was growing so I wasn’t the class clown or anything but I was always funny when I was comfortable with people I know.

17. When can people see it?
– I usually play all around the city; I produce a show at New York Comedy Club with my buddy Kase Raso. The show is called COLD BEER and the next one will be June 27 and 9:15.
18. Is there anything else that you wish to promote?
Yes, you can listen to Chris Scopo podcast called Suite Buddies that I do with my two roommates Mike Albanese and Alex Pavone, you can find it on Sound cloud and iTunes. You can also contact Chris Scopo on all forms of social media even Lindken @chrisscopo.