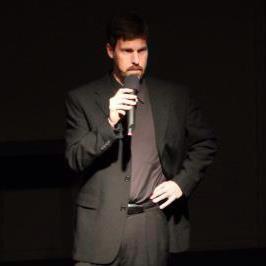 Like a classic car with a Hula girl on the dash, Jeff Ahern’s comedy is timeless and kitschy! He is the official warm up for Acme Comedy Theater and one of the few (funny!) white comics to perform on both Comic View and Showtime at the Apollo. He wrote for several years for US Weekly’s fashion police and has sold jokes to the Tonight Show. His numerous commercial credits include a 7-Up spot directed by Ridley Scott.

In addition to being an in demand standup comic, he also improvises and performs sketch regularly at ACME Comedy Theatre in Los Angeles. He has performed with the Second City in Detroit as a member of their Tour Co, as well as the house team Inside Vladimir with both Amy Poehler and Tina Fey at the legendary Improv Olympic in Chicago. Some of his favorite improv work in Chicago was done with the Free Associates performing improvised Tennessee Williams. His latest favorite improv show was Who Is The Blue Justice? at ACME Comedy Theatre, where he’s also done their online sketch show-ACME Saturday Night.

A member of SAG and AFTRA, Jeff can also be heard on Sirius/XM Raw Dog comedy channel. Parental Discretion is Advised and Laughter Encouraged!