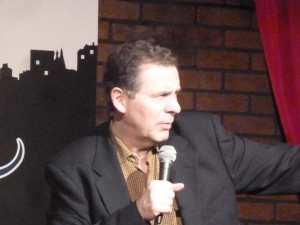 Bill McCarty is one of the nation’s most gifted comedians.  Clever and quick, thoughtful and aware, he elevates stand-up comedy to the level of fine art.  His funny, imaginative routines and good-humored jibes are perfect for any audience, any event.

McCarty’s talents have been seen on television’s The Rosie O’ Donnell Show (NBC) and Late Night with Conan O’ Brian (NBC), as well as Evening at the Improv. (A&E) and Caroline’s Comedy Hour (A&E).

He has performed at many of the nation’s best venues such as New York City’s famous Comic Strip, Atlantic City’s prestigious Tropicana Hotel and Los Angeles’ renowned Comedy Store.  In addition, McCarty was invited to perform stand-up comedy at the world class Edinburgh International Arts Festival in Scotland.  He has also entertained passengers on the Royal Caribbean and Norwegian cruise lines.

Bill McCarty is the unseen voice of numerous radio and television commercials for Cannon, Burger King and GMC trucks.  In addition, he has performed off, off-Broadway in the plays F-Stop and Triptych.