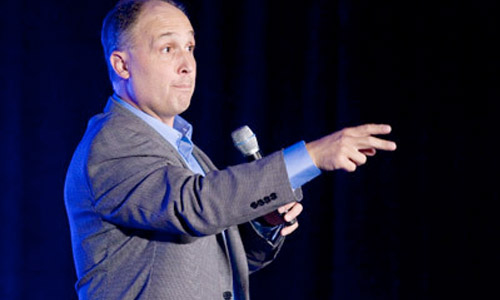 Since Brad Mastrangelo was first pushed on the stage from a dare in 1991, he has been in constant demand from Boston to Las Vegas.

The ultimate story teller, Brad’s unique routine never fails to hit home with audiences of all ages and backgrounds. The following rave reviews attest to his talent.

“Brad’s high energy makes the crowd feel like they are on a carnival ride that they wish would never end” The Salem Evening News.

Steve Morse of the Boston Globe writes, “Brad’s street smart humor makes everybody in the audience feel like they grew up next door to him.

Vince Longo, General Manager of the South Shore Music Theater, “It’s not to often that someone grabs my attention like Brad did. He was hysterical, likable, and most importantly, clean. We can’t wait to have him back.”

As a frequent writer for Jay Leno’s Tonight Show monologue, Brad has held his own on the comedy circuit with such luminaries as; Lenny Clark, Kevin James, Ray Ramano and the legendary Pat Cooper, who said “Brad is a throwback to the old days. A gifted storyteller who doesn’t have to use four letter words to get laughs.

Brad’s high energy brand of family and observational comedy has earned him rave reviews from the top comedy clubs in Boston, Hollywood, Atlantic City, and Las Vegas comedy clubs. He is a favorite on many cruise lines and at corporate events.

Brad Mastrangelo is truly one of the best comedians in the country. He genuinely loves to make people laugh. What more can you ask for from a comedian?

Brad was asked to preform at this years (2006) “Comics Come Home”, which is hosted by Dessis Leary.  Seven thousand fans packed the Agganis Arena on the campus of Boston University for the show.  Dennis himself said “Brad stole the show,be blew the roof off the building”.