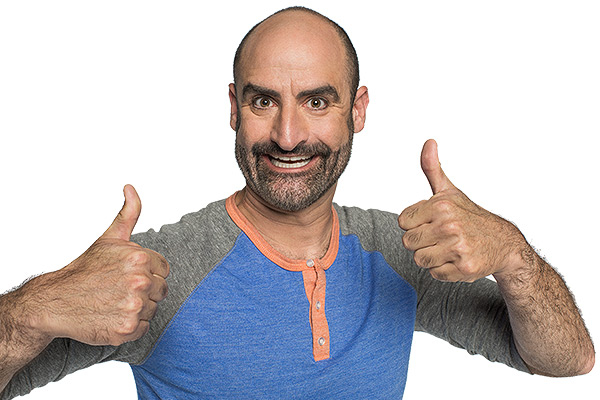 Dear fans and prospective clients, Brody Stevens is a comedian who possesses that always elusive natural character – many on the inside call him “The Entertainers’ Entertainer”. He is a hot comedy ticket all across the United States with many of Brody Stevens live shows happening in Los Angeles. Brody found his calling in Seattle where he began doing stand-up in the mid-90’s – working out of The Comedy Underground and other notable Emerald City establishments. In addition to his stage work, The Brody Stevens Cable Access TV Show was a cult favorite throughout the Pacific Northwest – The show was zany, in your face and live for two years, adding much needed spunk to Seattle’s dreary climate… Brody Stevens moved to New York City. – Three years in the Big Apple doing everything from the ultra-hip Luna Lounge to Lower East Side street theatre – On top of that, giving tours at Radio City Music Hall… Brody Stevens is Currently active in the Los Angeles live comedy scene. Brody’s many credits include.. *Comedy Central’s Premium Blend *Sarah Silverman’s Jesus is Magic *CBS’s Late Late Show w/Craig Kilborn (three times, five counting re-runs) *Road to Park City (Slamdance Film Festival) *NBC’s Late Friday *PAX-TV’s Next Big Star w/Ed McMahon Another fact, Brody has paneled on National Lampoon’s Funny Money – sketched at Jimmy Kimmel Live – passed FX’s The Test w/Jillian Barberie and is a daily contributor for the Best Damn Sports Show Period on FOX. The Best Damn Sports Show, The Man Show, The NFL Show, various pilots and Late World with Zach Galifianakis are just a few of the many events that have requested his service. Brody Stevens has also appeared in several independent films – hosted Levi Strauss: Semester Online – toured America with the You Laugh, You Lose College Game Show and tamed audiences at the upstart Chicago and Vancouver Comedy Festivals. Brody just wrapped a pilot for Comedy Central (Defending Your Date) and will be laying down video commentary on The Sports List (check your local FOX affiliate). Also, Mr. Stevens is a frequent visitor to the radio airwaves that blanket the Lower Forty-Eight – most notably, The Tony Bruno Extravaganza on Sporting News Radio and the nationally syndicated All Comedy Radio. On each coast, Brody Stevens is fast becoming a crowd favorite – And to those in the know, he’s a hot commodity with child-like exuberance, taking on the business of laughter with a smile.