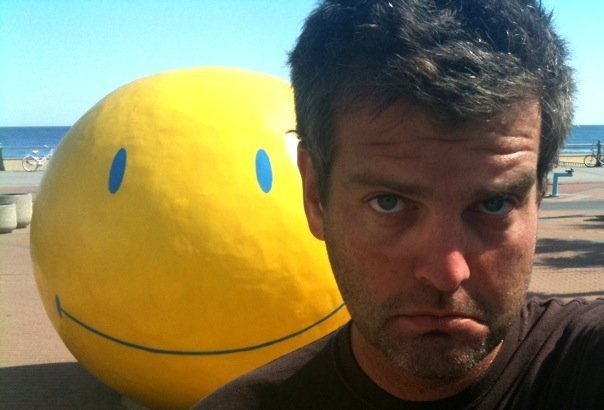 “Life’s short. I’m not!” is more than just a pun for this 6’7”, 225 lb, hairy giant; it’s his motto, mantra and mission statement, meaning “Tall or small, LIVE LARGER THAN LIFE!” After leasing his soul to advertising for several years, Bronston’s back at the mic doing what he loves most — Saying Something without Selling Anything.

LA Weekly calls him “certifiably unique.” Bronston says it as he sees it: he’ll pull punchlines from his politics or his pants – but not politicians pants – he’s not that filthy.

Bronston is gaining a following in the UK. At the Edinburgh Fringe ’12 & ’13, he’s earn four and five star reviews. He’s toured some of UK’s top clubs. Bronston’s standup has been featured on Rooftop Comedy and ComedyTimeTV. He’s acted in TruTV’s “All Worked Up,” charity spots for UNF–KTHEGULF, plus commercials for Nike, Telenet and other things he’d never buy.

Bronston is a guest on numerous radio shows & podcasts. He also blogs for Huffington Post Comedy.

Behind the camera, Bronston produced or directed 300+ commercials & music videos. He’s directed Olympians, Whoopi Goldberg, Kathy Griffin, Tommy Lee, NASCAR drivers and NFL All-Stars. Bronston directed the Top 20 video for Uncle Kracker’s version of “Drift Away.” He wrote and directed award-winning short “MaxiDoodles,” which skewered the commercial biz—then generated more ad work. Irony is awesome! Bronston produced the NYC shoot for feature film “W.E.” directed by Madonna. He production supervised HBO specials for David Brenner, Sandra Bernhard and Jerry Seinfeld. Jerry’s opened with a funeral for his retired material: Carlin, King, Leifer, Leno, McMahon, Reiser, Shandling, Wallace and Larry Miller were there! Bronston too (although in production moho) — inspiring! Perhaps that is why much of his material deals with death… Or celebrating this incredibly short but amazingly awesome life!