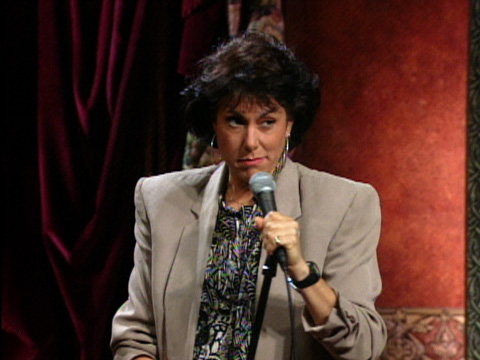 Carol Siskind started her stand-up career in New York, honing her skills in all of the comedy clubs in the City. She then moved on to Los Angeles where she appeared on many television shows. When she first appeared on “The Tonight Show with Johnny Carson”, he came to her dressing room after her spot and said , “Welcome to the family”). She did ‘stand-up’ and ‘panel’ on “The Tonight Show with Jay Leno”, was a regular on Fox’s “Comic Strip Live” and “Sunday Comics” where she performed and wrote a series of personal film pieces. She’s been seen on two Showtime specials and also hosted a segment of Lifetimes popular series, “Girls’ Night Out”.

Carol has headlined clubs, colleges and theatres throughout the United States, England and South Africa.

She also lived in Las Vegas, Nevada, where she can say she worked for every major hotel/casino on The Strip and Downtown. She did numerous corporate shows there, as well, winning a “Meatball” award for “Best Female Comedian in Las Vegas”.

Carol is known for her neurotic, edgy take on her own behavior, with lines like, “I am so neurotic, I wish there was a ‘Miss Neurosis Pageant”. I could win this; I have my speech ready… my hobbies are… stewing in my own juices, making mountains out of molehills, and blowing things completely out of proportion… and for the talent portion, I’d like to jump to the wrong conclusions”.

She easily makes fun of herself, with lines like, “I believe in reincarnation; I know I’ve had other lives, that I’ve been here before…y’know how I can tell?…I’m EXHAUSTED!

Or…I know I was rich in a previous life, because I’m still spending money like I have it.

While women love her take on relationships, men also appreciate her humor. To them she says, “You’re nicer than we are. You’re cuter, you’re sweeter, you’re walking around in a testosterone fog; you have no idea what the hell is really happening”.

Carol’s comedic performances have not only been limited to stand-up. She played comedy roles on TV, including an unforgettable episode of “Baywatch” (where she was thankful to wear a wet suit, rather that the pre-requisite bikini.) She played another memorable role, as “The Potato Lady” on Garry Shandling’s brilliant HBO series, “The Larry Sanders Show” and in the Off Broadway play, “Ernie and Arnie”.

The American Comedy Awards also nominated her a “Best Club Comic of the Year”.

Carol currently has a project for the Web in the works. She once again resides in her hometown, New York City.