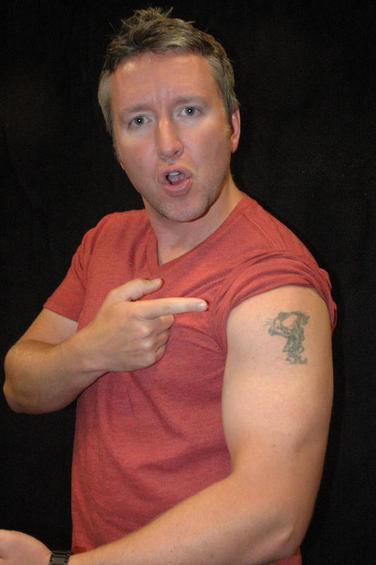 This is more of an AutoBio than a Bio. The truth is most comedians write their own bios. I’m not judging. It’s a lot easier to brag about one’s own accomplishments while hiding behind third person. They are very well written. It seems comedians either 1. Have a Masters in English, or 2. A Thesaurus, and a lot of free time. I have neither.

I could write things like: Chad’s devilishly naughty nature shines through like comedy gold when he takes the stage. Chad’s disarming personality allows him to push boundaries only the truly funny attempt. His edgy style usually begins by splitting the room into two equally stunned fractions and then miraculously ends up with everyone leaving the club with a new favorite comedian. But that’s lame. Or I could write: Plenty of comics have jokes about marriage and children, but few speak about the experience with such uncompromising honesty. “Babies are miracles. Think about it.

When they’re born their feet are tiny. Yet, they can somehow step on all your hopes and dreams.” It’s this acidic material, cut with underlying sweetness and served up with a knowing smirk, that perfectly encapsulates Daniels’s take-no-prisoners style of comedy. Even though he was born and raised there he’s not interested in Minnesota Nice. With his onstage swagger and arsenal of incisive, uproarious material, he practically bullies the audience into loving him. Sounds awesome, but that’s not how I talk.

The truth is I’d rather you come see me to check it out for yourself. To get you to the club I’ll tell you this.

In 2004 I performed in the New Faces show at the prestigious Just for Laughs Comedy Festival in Montreal. I’ve been on the Late Late show on CBS with Craig Kilbourn and Craig Ferguson. In 2006 I was on Comedy Central’s Live at Gotham. I have three CDs. “Two Minutes for Stale Hacking” which was self-produced, “Busy Being Awesome” and my latest “You’re the Best” both on Stand-up! Records. I was named “Artist of the Year” in comedy by City Pages in 2009. I’ve been seen numerous times on “The Bob and Tom Television program”. I performed at the Aspen Comedy Festival for Rooftop Comedy and was given the award Comic’s Comic. I have a half hour special called Comedy Central Presents… Chad Daniels, which was voted #5 of all time in 2010. I am one of 13 comedians that have the honor to say they were on the Tonight Show with Conan O’Brien. I was invited back to the Just for laughs Comedy Festival in Montreal to perform in The Masters Show. In 2012, I won the Gilda’s Laughfest Competition, performed on Conan’s new show, and released a free one hour special called “As Is” on the internet.

I’m funny. If you’re still not willing to come to a show you’re just being difficult.