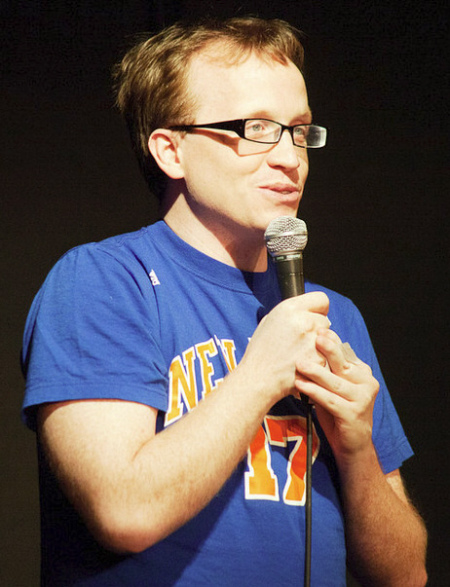 Chris Gethard is a writer, actor and comedian living in New York City. He recently replaced Jon Heder in the upcoming Comedy Central project, “Big Lake,” co-starring Horatio Sanz and Chris Parnell. Chris can also be seen in the upcoming feature, “The Other Guys” alongside Will Ferrell and Mark Wahlberg.

Gethard has been seen in dozens of shows at the Upright Citizens Brigade Theater in New York City over the years, but his most recent project is a variety/talk show he hosts monthly to sold-out audiences called “The Chris Gethard Show.” Recently, Chris flew out a downtrodden Midwesterner named Mitchell Fesh and made him the guest of honor for the night amongst a packed house comprised of both fans and fellow UCB performers.

Chris can also be found at UCB every Sunday in Asssscat, every Friday as part of The Stepfathers and monthly in “The Nights of Our Lives,” a storytelling show he created which Metro has referred to as “the funniest night in New York.”

He performed his one man show, “Chris Gethard’s Magic Box of Stories,” to sold-out crowds at the UCB Theater in both NY and LA, and was also featured at the Just For Laughs festival in Montreal. On two separate occasions, Chris has taken his show on the road, loading 60 of his fans onto a bus so they could experience his stories in the sites where they took place (including the suburban basement where he lost his virginity).

Chris has also been active in the world of publishing. His writings have appeared in numerous magazines and he is the author of the book “Weird NY,” as well as the co-author of the best selling books “Weird U.S.,” “Weird NJ” (Volumes 1 and 2) and “Weird VA.”

Chris also served as a guest writer for “Saturday Night Live” and was a founding writer at the Onion News Network.