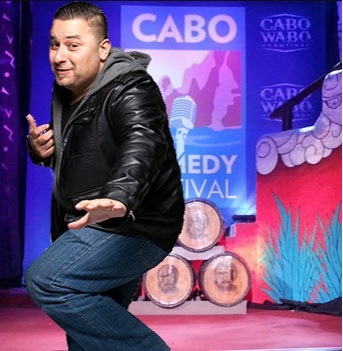 Cisco is an American comedian made with Mexican parts. He has been referred to as “edgy”, “real” and a “must see” performer that can go from 0 to funny in a nanosecond. He was born and raised in Los Angeles, California where he attended Cal State Long Beach University as a history major. Cisco’s day jobs have included appearing in films, television and, currently, working as a morning radio personality.

Cisco’s “class clown” personality has always been the reason for his troubles in school, at work or just everyday life. On May 1, 2003, he decided to take his talent to the stage, as a comedian, for the very first time and, by his own account, was “nervous as sheep in the south on Valentines Day.” Being a natural, the audience gave him a standing ovation… all 18 of them. Cisco used that night as a launching pad, and has gone on to become a crowd favorite wherever he performs. He enjoys entertaining diverse audiences with his interesting, philosophical views on life’s challenges, cultural differences and skewed views on relationships. Cisco’s talents have taken him across the United States and abroad. Cisco has appeared on Mun2’s “Loco Comedy Jam”, SiTV’s ” Latino Laugh Festival” and has had the privilage to showcase his talent for the Just For Laughs Comedy Festival as well.

Cisco is a paid regular at all of the major comedy clubs in Los Angeles and produces his own comedy shows. He can be heard daily hosting the morning show on SiriusXM 569 and occasionally as a guest host on ESPN 710 Los Angeles.