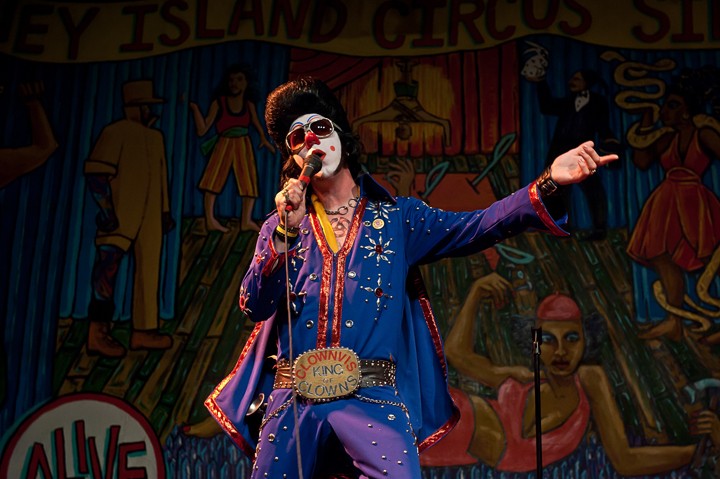 The L.A. Weekly calls Clownvis Presley “Better than the real Elvis”. A bold statement indeed, but when it comes to quick wit, unique songs, and genuine showmanship, its safe to say Clownvis has earned the title, “The King of Clowns”. From the sideshow at Coney Island to the hottest comedy events in Los Angeles and everything in between, Clownvis is constantly bringing his unique blend of comedy, song, and magic to stages across America.

When not sharing his love for entertainment on stage, the King of Clowns has been known to pop up on national television and stir up excitement on such shows as America’s Got Talent (NBC) and Judge Karen’s Court (BET). Hilarious internet videos and side splitting appearances on radio shows and podcasts also help to please the ever growing Clownvis Presley fan base.

Clownvis is currently a staple on the booming Los Angeles alt comedy scene. His monthly show held at the famous Hollywood Improv Comedy Club sells out regularly and has recently drawn the attention of such high profile media outlets as the L.A. Weekly and TMZ.

Performing alongside big acts like Little Richard, Neil Hamburger, Dresden Dolls, and Jewel have made Clownvis’ legendary stage show more in demand than ever. The King of Clowns shines brightest when he’s in the spotlight, and in addition to scheduling live shows in Los Angeles and abroad, he is currently working on a television pilot, a series of comedy shorts, and his own internet podcast! Viva Clownvis!