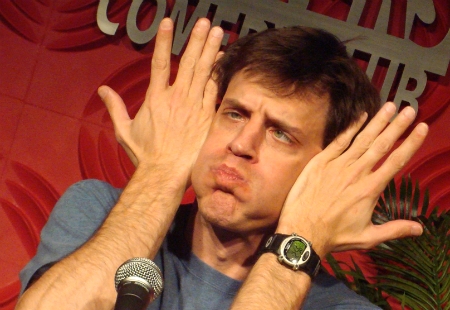 Since 1993 Dale Jones has been perfecting his craft and has become one of the funniest and most energetic comics in the country. He has entertained audiences and our troops throughout the United States, Canada and abroad. His zany on-stage character always sends club patrons to the exits with lots of questions but no disappointments.

His machine gun style of delivery and animated facial contortions combined with quick improvisations and non-stop physical comedy leave the audience wishing they had his energy. Forget “high energy”– this is frantic! His shows are always a night you won’t soon forget. Club owners and managers have gotten used to fielding questions about when Dale will be returning.

Dale started his career in Nashville, Tennessee. While working (mostly wasting) his days away in a factory, his co-workers dared him to try his hand at his life long dream, making people laugh. He stepped on stage for the first time at a Zanies Comedy Club’s open mike night. Two years later, Dale turned a dream into a reality and started doing stand-up full time.

Dale has worked hard to develop an act that’s truly original and non- stop funny. He reminds his audience of the great comedians that have influenced him: Abbott and Costello, Buster Keaton, Jerry Lewis, Tim Conway and Don Knotts.

In addition to his training at the world renowned Second City Dale has had numerous television appearances including TBS – The Very Funny Show, NBC – Last Comic Standing Season Six, Fox – 30 seconds to Fame and The Comedy Network in Canada. If you don’t blink you might see him in the 2003 MGM movie “Out Of Time” with Denzel Washington. He has also been on 2 nationally syndicated radio shows, THE BOB AND TOM SHOW and The BOB AND SHERI SHOW. He was one of 8 finalists in “The Great Canadian Laugh Off and he was invited to perform at THE BOSTON COMEDY FESTIVAL and THE TBS “JUST FOR LAUGHS” FESTIVAL.