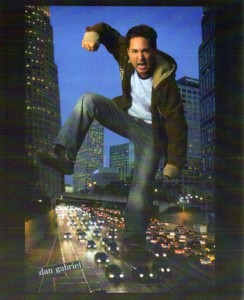 Dan Gabriel got bit by the comedy bug early in life. Dan grew up immersed in the world famous San Francisco comedy scene where his mom took him to comedy shows when he was just in grade school. While other kids were trading Garbage Pail Kids, Dan was trying to make his friends listen to Steve Martin albums on his travel case record player.

In college, he stepped up on stage for the first time and was instantly hooked. Ignoring his studies, Dan spent his nights at any open mic night or comedy event he could find. After graduation he began opening for his heroes like Dave Chappelle, Mitch Hedberg and George Lopez. Since then Dan has worked his way from opening act to nationally touring headliner.

Now considered a veteran jokesmith, Dan has appeared on CBS’sLate Late Show with Craig Ferguson, Showtime, Comedy Central’s Premium Blend, CBS’s Star Search, NBC’s Late Friday just to name a few. He was an award winning writer for Thugs on Film on BBC America and the Winner of the L.A. Take Out Comedy Competition. Take Out opened the doors for Dan to co-develop and host the hit first season of Asia Street Comedy, on AZN TV. Today you can hear his podcast, “The Best Medicine” on iTunes as well as his two critically acclaimed comedy albums, “Giant Robot” and “Baby For Sale.”