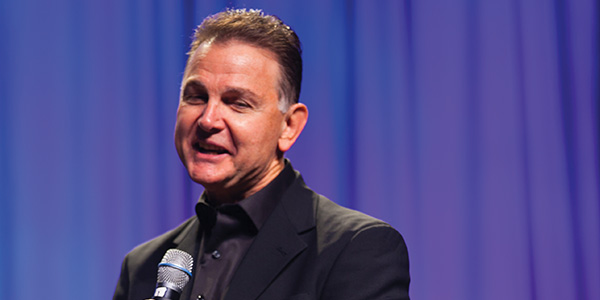 After a seven-year stint of headlining San Francisco clubs in the comedy duo Murphy-St.Paul, Dan launched out on his own with a solo act that was to land him in the finals of the nation’s toughest comedy competition, The San Francisco International Stand-Up Comedy Competition.

Soon after, Dan moved to Los Angeles and appeared on several episodes of “An Evening at the Improv”, plus numerous shows on VH-1, MTV, and Comedy Central. Since then, he has opened for such superstars as Jerry Seinfeld, Natalie Cole, Dwight Yoakum, Smokey Robinson, and Vince Gill. In a testament to the class of his act, Dan even opened for the San Francisco Symphony (“These guys are great! I knew them back when they were just a garage band.”) .

He appeared in the movie “Flubber” with Robin Williams, and signed a recording deal with MCA records. His CD, “Natural and Good for You” contains one the most requested comedy pieces on radio, “The First Baseball Game”. He also is the star of his own one-man play, “Outer Mission, Middle Class – The Comic Diary of an Immigrant’s Son”.

The Los Angeles Theater and Entertainment Review said about Dan, “Combining a sharp, clean wit with an outstanding talent for creating characters, Dan’s show appeals to audiences of all ages…what sets Dan apart is that he doesn’t just tell jokes, but rather creates a series of comedic events.”

Armed with a Bachelors Degree in Italian from UC Berkeley, a teaching credential from San Francisco State, and a Masters Degree in special education, the majority of Dan’s material comes from being a suburban husband and father and dealing with the frustrations of everyday life.

Corporate clients include Hewlett Packard, National Semiconductor, IBM, Intel, Nations Bank, Philips Magnavox, Chevron, Blue Cross, and many, many more. He customizes his material for each client and event.

Dan lives in Foster City, CA with his wife Cara and his son Roy.