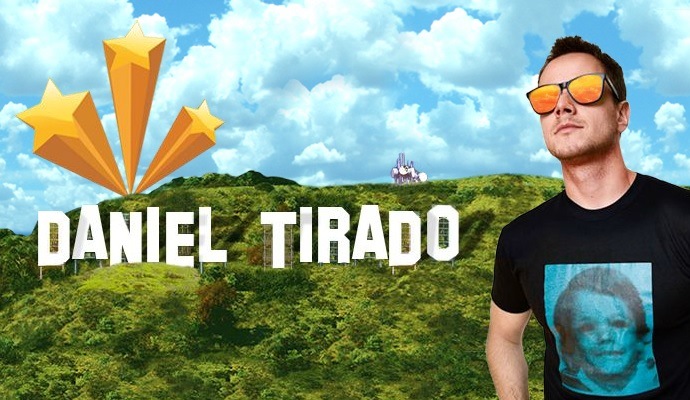 Conceived in Spain, Daniel Tirado was born to a Polish mother and Peruvian father. Growing up in Montreal, Canada, Daniel was fortunate to be surrounded by a diversity of cultures. His fluency in four languages (English, Spanish, French and Polish) allowed him to develop different parts of his brain and become super smart.

In 2000, Daniel completed a Bachelor of Arts degree in English Literature at McGill University. He then followed his acting dream to New York City where he graduated from the Neighborhood Playhouse School of the Theatre in 2002.

It was in New York that he first ventured into stand-up comedy… for a Harlem crowd! He bombed terribly and decided to quit. Ten days later, he pulled himself together and hasn’t stopped since.

In 2004, he started developing stage characters. Among those he created, we find a sleazy Cuban salsa instructor known as Tony Mambotana – The Latin Salsation, and a traveling gypsy who goes by the name of Johnny “Flames” Flamenco. After only 6 months of bringing Tony Mambotana to the stage, he was invited to perform at the world-renowned Montreal Just For Laughs Festival in 2005.

In 2010, Daniel was welcomed back, this time as himself, appearing in various shows including “Best Of The Fest” as well as a televised gala in the French division of the festival “Juste Pour Rire”,making him one of the very few comedians to work the event in both languages. The following year, in collaboration with JFL, Daniel was featured on a Spanish comedy specialOMNI Presents Bilingual Stand-Up which aired across Canada on the OMNI TV network, making it his 3rd appearance at the festival. In addition, Tirado’s writing has been utilized by McDonald’s for their McCafe radio campaign sponsored by JFL.

Daniel also toured with MRSOE (Most Races Show On Earth) in 2012, playing eight states including SC where he entertained audiences at the Charleston Comedy Festival.
This year, Tirado made his American television debut showcasing his talent on AXS TV’s Gotham Comedy Live and was picked out of 300 comedians in NYC to perform for StandUp NBC.
Be it comedy clubs, colleges, corporate events, military bases or urban circuits, Daniel always enjoys captivating his crowds with his clean yet charmingly edgy sense of humor.
Daniel now lives in New York performing regularly at some of the most prestigious clubs in the city.