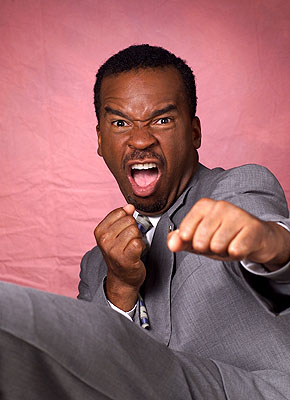 Countless theater, television, film, and comedic endeavors have charted David Alan Grier’s career’s path to stellar heights, and his ability to excel across all mediums and contexts is a testament to his inherent sense of comic timing and creative drive. The Tony and GRAMMY Award nominee was trained in Shakespeare at Yale where he received an MFA from the Yale School of Drama. Given David’s experiential background and artistic capability, it came as no surprise when Comedy Central named him as one of their “100 Greatest Stand-ups of All Time.”

In May 2013, David will star in the comedy PEEPLES opposite Kerry Washington and Craig Robinson. The film was produced by Tyler Perry. In addition to his film and theater endeavors, 2013 will see David joining the cast of BAD TEACHER, CBS’ single-camera comedy series adaptation of the hit 2011 movie by the same.

His television work is highlighted by a turn as principal cast member on the Emmy Award winning In Living Color (1990–1994) where he helped to create some of the show’s most memorable characters, DAG (2000–2001) and Life with Bonnie (2003) which earned an Image and Golden Satellite nomination. David created, wrote and executive produced a show for Comedy Central called Chocolate News (2008).

Grier made his film debut in Streamers (1983), directed by Robert Altman for which he won the Golden Lion for Best Actor at the Venice Film Festival. He appeared in the Wayans Brothers’ spoof movie Dance Flick (2009) and recently wrapped filming the comedy PEEPLES, produced by Tyler Perry, opposite Kerry Washington and Craig Robinson.

Grier began his professional career on Broadway as Jackie Robinson in The First, for which he earned a Tony Award-nomination for Best Featured Actor in a Musical and won the Theatre World Award (1981). He then joined the cast of Dreamgirls before going on to star opposite Denzel Washington in A Soldier’s Play, for which both actors reprised their roles in the film adaptation titled A Soldier’s Story.

In 2009/2010 Grier starred in David Mamet’s acclaimed play RACE opposite James Spader and Kerry Washington at the Ethel Barrymore Theatre on Broadway for which he received his second Tony Award-nomination. Grier received his third Tony Award-nomination in 2012 for his “stand-out role of the rakish, drug-dealing Sporting Life” (NY Times) in The Gershwin’s Porgy & Bess. Grier received his first GRAMMY nomination when the cast recording of The Gershwin’s Porgy & Bess received a 2013 GRAMMY Award nomination for Best Musical Theater Album.