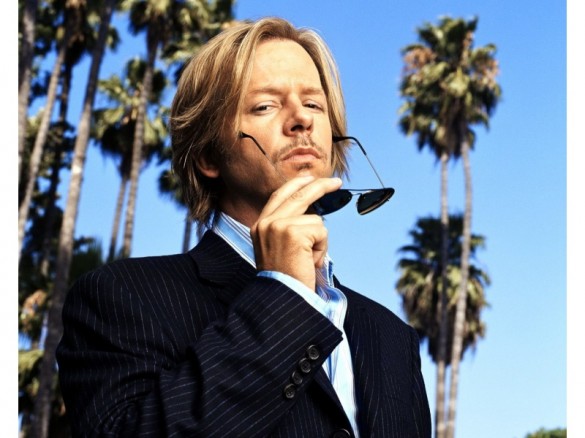 Nominated in 1999 for an Emmy Award for his memorable role as Dennis Finch, the wise-cracking, power-hungry assistant on “Just Shoot Me,” David Spade became a household favorite during his five-year stint as a cast member of NBC’s “Saturday Night Live.”  The comedian was also nominated for a Golden Globe in 2000, an American Comedy Award in 1999, for his work on “Just Shoot Me”. Spade’s television and film career continues to grow.

Most recently Spade was seen starring in Sony Pictures’ GROWN UP’S 2 alongside Adam Sandler, Chris Rock, and Kevin James. The film is a follow up to the 2010 hit comedy about a group of childhood friends who reunite years later. The film was released on July 12, 2013 and grossed $42 million opening weekend.

On the small screen, Spade was recently seen on the seventh and final season of the CBS comedy “Rules of Engagement.” The show was produced by Sony’s Happy Madison Productions and centered around three men, in different stages of their relationships: married, engaged and single. The half hour situational comedy stared Spade as the content bachelor and serial dater, as the comedy follows this unique friendship. The show enjoyed excellent ratings throughout all seven seasons.

Last year, Spade was heard as the voice of the ‘Griffin invisible man’ in the animated feature, HOTEL TRANSYLVANIA alongside Adam Sandler, Selena Gomez, Steve Buscemi, Kevin James, and Andy Samberg to name a few.

Spade starred Sony Pictures’ box office hit BENCHWARMERS about a trio of guys who try and make up for missed opportunities in childhood by forming a three-player baseball team to compete against standard little league squads. The film which also stars Jon Heder, Adam Sandler and Rob Schneider opened at #1 in April 2006, making over 20 million in its first weekend.

In 2003, Spade starred in Paramount’s DICKIE ROBERTS: FORMER CHILD STAR, which he co-wrote with Fred Wolf.  Adam Sandler’s Happy Madison production company produced the film, which enjoyed a #1 opening weekend slot at the box office.  In it he plays a struggling actor who hasn’t seen the light of fame since puberty.  He fixates on a movie role that will bring his career back to life, but in order to get it, he has to re-live his childhood.  He proceeds to rent a family in order to learn how to be a normal kid.  DICKIE ROBERTS has the same smart, dry comedy as all of Spade’s movies, but also has an incredible heartwarming effect as you watch him grow with and learn from his “rented” brother and sister.

In 2001, Spade starred in Columbia Tristar’s JOE DIRT of which he also co-wrote.  In this Happy Madison production, Spade portrays ‘Joe’ a man searching for his parents who abandoned him as a baby at the Grand Canyon.  JOE DIRT enjoyed enormous success at the box-office and continues to be a top selling DVD.

Spade co-starred with “SNL” alumnus Chris Farley in the films TOMMY BOY and BLACKSHEEP, and the pair won a 1996 MTV Movie Award for ‘Best On-Screen Duo’ for the former.  His other feature credits include REALITY BITES, LIGHT SLEEPER, and CONEHEADS.  In 1999, Spade starred the romantic comedy LOST & FOUND, for which he also co-wrote the screenplay.

In addition to “SNL,” Spade has guest-starred on the critically acclaimed “The Larry Sanders Show” and appeared in HBO’s “13thAnnual Young Comedians Special.”  In 1999 he headlined his own HBO special, “David Spade: Take the Hit.”

Born in Birmingham, Michigan, and raised in Scottsdale, Arizona, Spade began his career by performing stand-up comedy in clubs, theaters and colleges across the country.  He made his television debut on “SNL: and was soon named the Hot Stand-UpComedian of the Year by Rolling Stone magazine.  Some of Spade’s memorable characters on ‘SNL,” where he served as both a writer and a performer, included the sarcastic “Hollywood Minute” reporter on “Weekend Update” and he also started the catch phrases  “And you are…?” and “Buh-Bye!”.