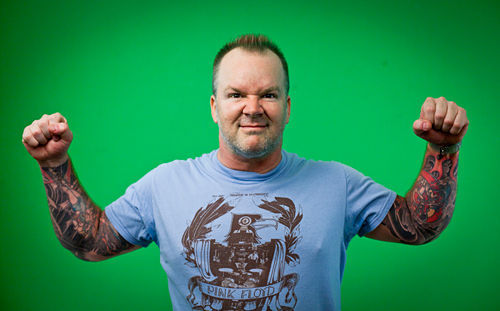 There is a lot of history in the canyons nestled in the Santa Monica Mountains that segregate Los Angeles. Racing through them like Uma Thurman in Tokyo in Kill Bill, is DEAN DELRAY on a blood-red Ducati. Bay-area bread Delray is a rare animal in Hollywood. His drive rivals that of his Ducati’s. 500 comedy shows in just over a year, two decades of high-end music business experience under his belt where he was signed by 4 Non-Blondes’ Linda Perry and went on international tours with The Wallflowers and opened up shows for Tom Petty Lenny Kravitz Black Crowes and many more as well as DJ and hosting gigs for The Rolling Stones.

Delray was also in Quentin Tarantino’s Hell Ride, where he not only acted but laid a track down for the original soundtrack. He has also been featured in Ice Cube’s The Longshots and has Noise Matters in 2011.

Back to comedy though. Delray performs everywhere. From Hollywood to the beach, back to the eastside and then The Valley. He’s relevant in the LA comedy scene because he’s not trying to take shortcuts. Consistency goes a long way. Rubbing shoulders with sitcom star veterans and Century City assistants at The Improv or squeezing between Bentleys and taco trucks on The Sunset Strip outside of The Comedy Store, Delray is always out. Even when the clubs are closed and you think that there’s no possible way you’ll see this guy for at least another twenty four hours, there he is at the 101 Cafe on Franklin Avenue just under the Hollywood Freeway bridging the gap between LA and The Valley. A couple thousand people are stuck in 2am traffic leaving night clubs and night jobs and Delray is eating diner food with his peers, fellow comics, moving up in the world.
How do you move up in the world when you already live at the top? You go side to side. Medium to medium. Music? Been there done that, two decades, whatever. Movies? Did a Tarantino film. Ice Cube movie. Next. Comedy? Improv, Comedy Store, and every show in between; standing in the back, waiting for his spot while network television executives and cowboy talent agents scope the room. Spots all over town. Fresh Faces competition at The Laugh Factory in Hollywood? Won it.