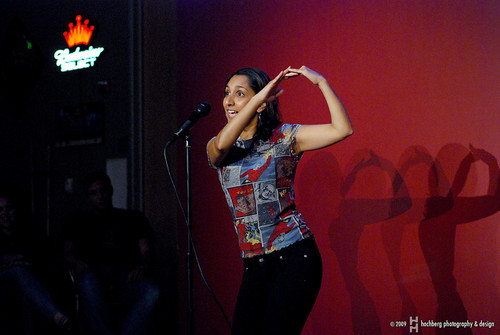 Dhaya is a stand-up comic, storyteller, and TV host. She is a favorite at corporate events as well as festivals like the Bridgetown Comedy Festival (2013), SF Sketchfest (2013, 2012), the Boston Comedy Festival (2012 semifinalist), and the Women in Comedy Festival (2013). She is the Grand Prize Winner of Comedy Central Asia’s “Ultimate Comedy Challenge” (2013). She was also the Grand Prize Winner of On24′s virtual comedy competition. She is a frequent storyteller on NPR’s “Snap Judgment,” has appeared on PBS’s KQED, and hosted the Emmy-award winning television series “High School Quiz Show” on PBS’s WGBH.