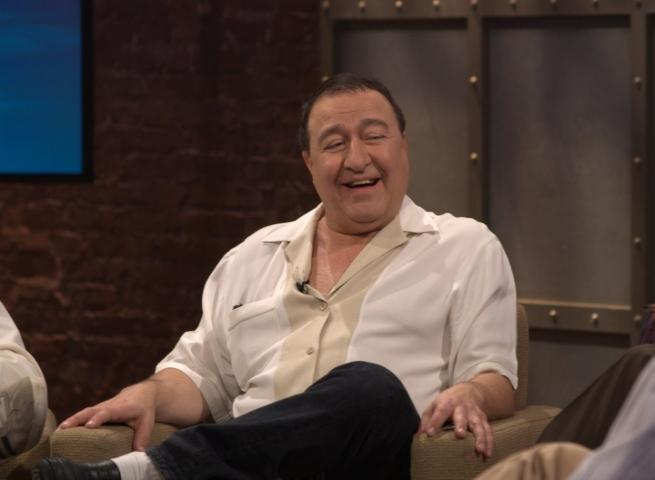 Nominated, six times for an American Comedy Award, Dom Irrera’s stand-up material was honed in a multi-generational Italian household in South Philadelphia with his mother, sister, grandmother, uncles and cousins all under one very big roof. A great-grandmother even lived across the street. Together there were three floors and four generations of family.

His first big break was his performance on Rodney Dangerfield’s “Nothing Goes Right” comedy specials for HBO. In 1989 Irrera’s own HBO “One Night Stand” earned him his first CableACE award for Best Stand-Up Comedy Special. In ’95 he won a second CableACE for the Showtime stand-up series he hosted, “Full Frontal Comedy”. That same year he received a second CableACE nomination in the writing category for his work on Comedy Central’s animated series, “Dr. Katz: Professional Therapist”. He also starred in a solo stand-up special for HBO in ’92 titled “Command Performance”.

He has performed on “The Tonight Show with Jay Leno”, “The Late Show with David Letterman”, “Late Night with Conan O’Brien”, “The Late Late Show with Craig Ferguson”, “The Daily Show with Jon Stewart”, “The View”, and has made several appearances on “Oprah”. Recent credits include an all-new stand-up special titled “Comedy Central Presents”, which aired on the cable network this past summer.

As an avid sports fan, he hosted four seasons of Comedy Central’s irreverent football show, “Offsides”, where he conducted hilarious on-the-field interviews with football greats. He also hosted Comedy Central’s “Behind the Scenes at the American Comedy Awards: specials in ’98 and ’99.

Irrera was a series regular on the ’98 Fox comedy “Damon” starring Damon Wayans and his guest-star credits include “Seinfeld” (he played an annoying prop comic needling Jerry in the memorable episode), “Becker”, “Everybody Loves Raymond” and “King of Queens”. In addition, Dom voices the character Ernie, the demolitions expert, on Nickelodeon’s “Hey Arnold”.

His film work includes a featured role in Robert Townsend’s “Hollywood Shuffle”, a cameo in the Coen Bros. Film, “The Big Lebowski”, “The Fourth Tenor”, starring old pal Rodney Dangerfield, and he played himself in the Rodney Dangerfield / Dom De Luise film, “The Godson”.

Dom has performed at Montreal’s prestigious “Just For Laughs Festival” and the “Cat Laughs Festival” in Kilkenny, Ireland (he’s made more appearances at both festivals than any other American comic). He also has performed at the “Melbourne Comedy Festival” in Australia, and at “Edinburgh Festival’s” Assembly Hall. It was there that he received the “Herald Award” for artistic excellence.