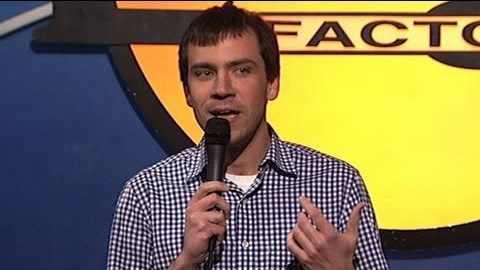 Eli Olsberg is a stand-up comedian, writer, and actor based in Los Angeles, CA. He performs at clubs and colleges across the country. He performed at the TBS’ Just for Laughs Comedy Festival in 2012 and has been seen on E!’s “Chelsea Lately.”

In LA, he co-produces (with comedian TJ Miller) the popular bi-weekly stand-up show “Performance Anxiety,” at The Pleasure Chest in West Hollywood. He can be seen at local clubs and alternative venues and is a regular at The Laugh Factory and the Hollywood Improv.

‘an alternately confident and self-depricating style.. a man to watch if you are looking for comedic entertainment that is intelligent, incisive, and with a bit of an edge.” – LA Comedy Club Examiner

That quote had some big words in it, the person who wrote it clearly know what they’re talking about! Eli also loves dogs, cookie dough, and like everyone else, enjoys all kinds of music, except country.