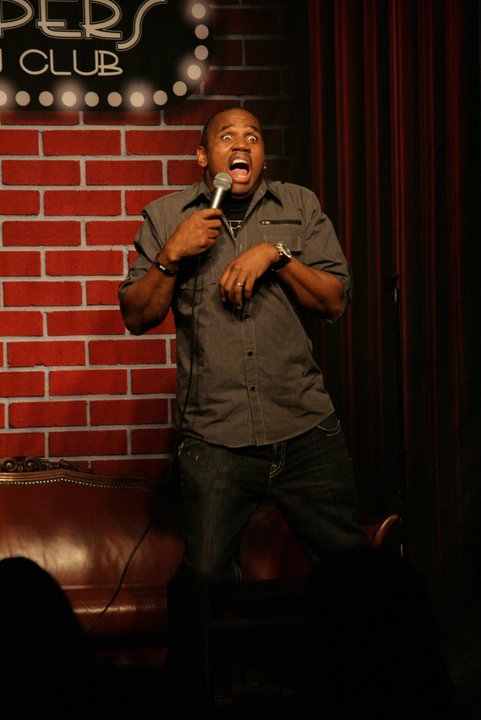 The most significant challenge for the modern comedian is their ability to relate to a variety of audiences. Eric Blake has taken this challenge to heart, expanding his material beyond the African- American lens, and identifying with many other cultures and experiences. He is one of the few performers who can truly be labeled as a “universal comedian,” defying comedic normality. Blake’s raw talent is also distinguished by his ability to custom-fit his comedy for the particular moment. This witty improvisation can be revealed at the drop of a hat, bringing new characters to life that flow directly from the unconscious, capturing the imagination of his audiences.

This engaging comic has proven his worth night after night, performing to diversified audiences from coast to coast. Some of his performances include NBC’s “Last Comic Standing,” HBO’s “Bad Boys of Comedy,” BET’s “Comic View,” in which he has aired on “The Best of Comic View” for the fourth consecutive year. He has also been televised on Galavision’s “Que Loco,” where he has displayed his crosscultural abilities that have earned him a devote Latino following. Furthermore, Blake performed as the headliner for the comedy hit entitled “War On Comedy,” which aired on HBO and has recently been released on video. Eric’s acclaimed notoriety lead HBO to choose him among thousands to film a documentary on the eight most up and coming comedians in the country, which is scheduled to air in the fall of 2006. In addition, he has appeared on Comedy Central’s “Premium Blend” and is a regular at “The Improv” in Hollywood.

Eric is a survivor of the notorious streets of South Central Los Angeles, where he experienced the “hard knock” life of gangs, drugs, and violence. It was eventually the depraved life on the streets that propelled him on a search for meaning and purpose, where he began to rediscover his passion and talent in comedy. As a young teenager, Eric brought life to people through his spontaneous and lighthearted humor, and considered it pure joy when he was able to enliven another’s spirit through a simple joke. Blake’s challenged upbringing led to his rediscovery for purpose: bringing laughter to the soul. This newfound purpose continues to be exercised with the firm belief of the old Proverb, “a happy heart doeth good like medicine.”

Eric currently resides in Los Angeles, and when he isn’t performing his time is spent cultivating the blessings of family. Above all, as Blake rises to the pinnacle of comedy, he will never forget the place where he has come from.