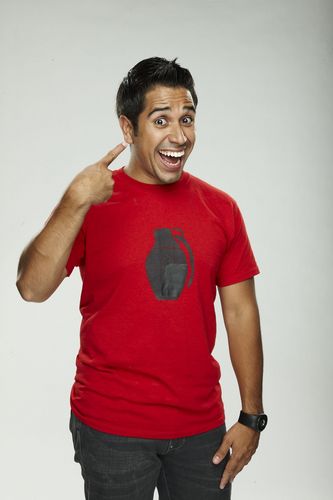 Since bursting onto the NYC comedy scene, Erik Rivera’s name has become synonymous with comedy. His “boy next door” good looks and unique perspective make him one of today’s fastest rising young comedians. With quick wit, commanding stage presence, charisma and an infectious smile, Rivera has become a favorite act at comedy clubs, events and colleges throughout the country.

A regular at NYC and LA comedy clubs such as The Comedy Cellar, Comic Strip Live, Gotham Comedy Club, The Laugh Factory and The Comedy & Magic Club, Erik’s star is quickly rising! Last year he was honored to make his Late Night debut on the Tonight Show with Jay Leno, a recognition that has been a springboard to many comedy greats. Since that prestigious opportunity, Rivera has proven to be on the top of everyone’s list. The National Council of La Raza and NBC reached out and tapped Erik as a presenter and official spokesperson for the ALMA Awards and NCLR. NUVO TV also hand selected Erik as their official spokesperson for Hispanic Heritage Month, presenting a daily Factiño commercial series. Rivera is steadily becoming a familiar face on cable networks nationwide as he’s also appeared numerous times on MTV Tr3s, Comedy Central, TV Guide and most recently NUVO TV’s Latino 101.

With his diverse audience reach and unparalleled work ethic, Erik is one of the most requested comedians working today. In 2010, he had the privilege of being chosen by NBC to represent their network’s Stand-Up for Diversity College Tour. The tour took Rivera from coast to coast, bringing laughter to over fifty colleges and universities. During the Holiday season, Erik served as the spokesperson for the Duracell SmartPower Lab in Times Square, interviewing celebrities and interacting with fans in person and online. The National Hispanic Media Coalition invited Erik to be their special guest performer at their annual Impact Awards Gala, which honors Latinos in Entertainment. He has also appeared at The Hollywood Latino Laugh Festival alongside Carlos Mencia, Gabriel Iglesias and Last Comic Standing winner Felipe Esparza to a packed house at The Kodak Theatre in Hollywood, winning the Diamonds in the Rough Award. In 2008, 2009, 2012 &amp; this year Erik was honored to be the only comedian to perform for The Congressional Hispanic Caucus Institute at theWarner Theater in Washington, DC- the only comedian to date to have been brought back a record number 4 times!