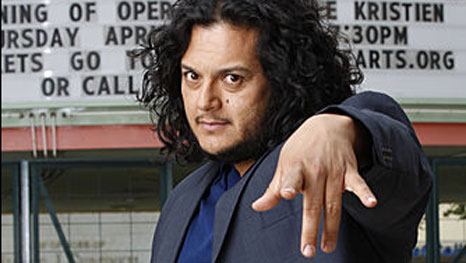 Felipe Esparza is a comedian and actor, best known for his raw, real-life comedy that audiences everywhere can relate to. Known for his wild hair and his often-imitated phrase, “what’s up, fool?”, people are often surprised to find out that Felipe is also the same person referred to and imitated by in several infamous stories by fellow comedian, Gabriel Iglesias. Felipe won NBC’s Last Comic Standing (2010) and is currently touring comedy clubs and theaters across the country. His first one-hour stand-up special, “They’re Not Gonna Laugh at You”, premiered on Showtime in 2012 and is now available on DVD and streaming on Netflix.

Felipe is a product of the streets of East Los Angeles (Boyle Heights, to be exact) and much of his material is the result of seeing the humor in the struggles of everyday life. “Over the years, I’ve noticed so many changes in all the neighborhoods around me. Gentrification starts to happen and bad neighborhoods start to become good but I like to show the other side of it… The guy who hasn’t changed and probably isn’t going to. I have a joke that kind of shows that. It starts off, ‘I know I’m not a tough guy, but I’m pretty sure I can beat up everyone who shops at Trader Joe’s’.”

Early in his stand-up career, Felipe appeared on Showtime in a “Diamonds in the Rough” segment. Since that time, he has appeared on numerous television shows, including ABC’s “Comics Unleashed”, Comedy Central’s “Premium Blend” and “Russell Simmons Presents Stand-Up at the El Rey”, Showtime’s “Comics Without Borders”, BET’s “Comic View”, and Galavisión’s first English-speaking show, “Que Locos” (where he holds the title of most appearances by any comedian). That show also spurred the careers of George Lopez and Gabriel Iglesias.