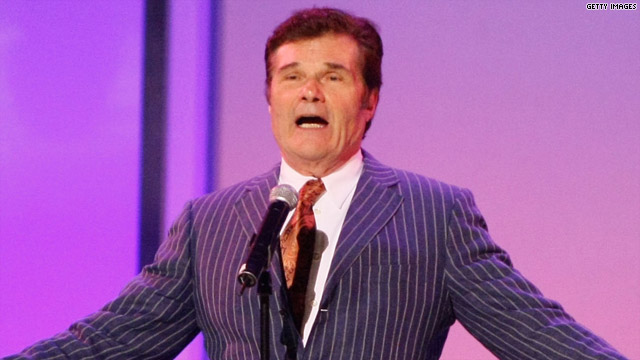 Four time Emmy nominee Fred Willard, radiates a unique charm that has established him as one of our generation’s most gifted comic actors. A master of sketch comedy, Fred is most heralded for his quick wit and improvisational expertise which he has exemplified in over 100 appearances on The Tonight Show with Jay Leno.

Fred has appeared in over seventy films. Fred’s work in Waiting For Guffman earned him an American Comedy Award nod for Funniest Supporting Actor.  For his performance in Best in Show, he won the Boston Film Critics Award, the American Comedy Award, The Sierra Award and a tribute from AFI. Some of his other film work includes; This Is Spinal Tap, Anchorman: The Legend of Ron Burgundy, A Mighty Wind, For Your Consideration, the Academy Award nominated  Monster House, and the Academy Award winning short film, Ray’s Male Heterosexual Dance Hall.  Fred starred as the only human in the Academy Award winning film, WALL-E and was honored by AFI for contributing to America’s Cultural legacy. The New York Times named WALL-Ethe best film of the decade.

Fred has appeared in over a thousand TV episodes.  From Get Smart to his recent appearances on Modern Family.  He co-starred with Martin Mull in the cult classic,Fernwood 2 Night. He was a regular on Sirota’s Court, D.C. Follies (again the only human) Maybe It’s Me, A Minute with Stan Hooper, and Back To You. Fred garnered three Emmy nominations for his performance as Amy’s Dad on Everybody Loves Raymond.  For What’s Hot, What’s Not he received a daytime Emmy nomination for Outstanding Talk Show Host.   He received his fourth prime time Emmy nomination for his performance as Phil’s dad on ABC’s Emmy winner, Modern Family.

His recent TV work includes a turn as Santa Jack in The Closer, Raising Hope and Franklin and Bash. In December he will appear on Hot in Cleveland. He will again appear as Phil’s dad on Modern Family in early 2013. He will be part of the Christopher Guest troupe in January for the new HBO series, Family Tree.

Fred and his wife Mary were honored for their charity work with Big Brothers / Big Sisters in 2011. In November of 2012 Fred was honored to receive a Lifetime Achievement award from the Olympia Film Society in Olympia, Washington. Fred also devotes his time to Actors and Others for Animals, LA’s Best, and dozens more, Fred received a commendation from the City of Los Angeles and Mayor Antonio Villaraigarosa for  “ outstanding humanitarian and philanthropic work helps to further the goal of making the City of Los Angeles a better place.”